Home / WORLD / ‘Poisoning the well of our democracy’: Pelosi & Schumer blast Republicans for ‘denying reality’ & not accepting Biden as president

‘Poisoning the well of our democracy’: Pelosi & Schumer blast Republicans for ‘denying reality’ & not accepting Biden as president 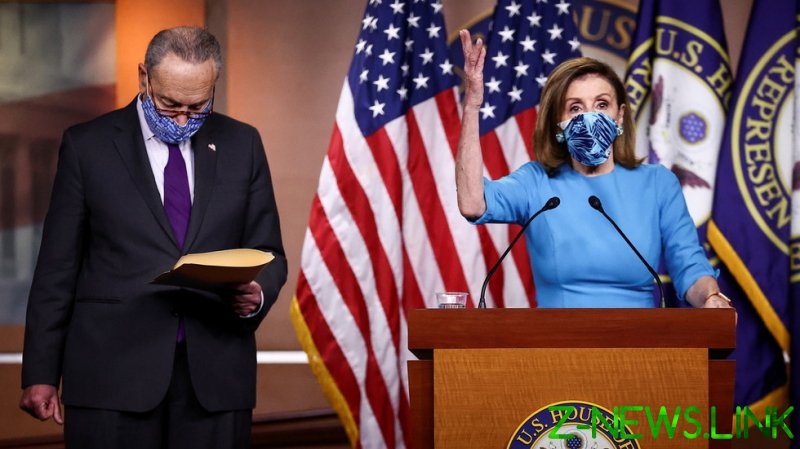 The harsh words for Republicans refusing to acknowledge Biden’s projected victory while President Donald Trump accuses opponents of voter fraud and waits on the outcome of multiple lawsuits came during a Thursday press conference.

“The election is over. It wasn’t close. President Trump lost. Joe Biden will be the next president of the United States,” Schumer told reporters.

Schumer accused Republicans in Congress of “spreading conspiracy theories, denying reality, and poisoning the well of our democracy.”

On accusations of voter fraud, Schumer said Republicans don’t have evidence to back up their claims.

The senator claims Republicans are “casting doubt” on the election for “no other reason than fear of Donald Trump.”

Pelosi took an equally harsh tone with Republicans standing behind Trump and his accusations.

Pelosi slammed the president’s supporters for not respecting “the will of the people” and engaging in “an absurd circus right now refusing to accept reality.”

“It’s like the house is burning down,” she said, “and they refuse to throw water on it.”

While Republican lawmakers like Sen. Susan Collins (R-Maine) have congratulated Biden on his presumed victory, others like Sens. Lindsey Graham (R-South Carolina) and Ted Cruz (R-Texas) have questioned the results.

Senate Majority Leader Mitch McConnell has also refused to acknowledge a winner in the race and said on the Senate floor this week that President Trump is “100 percent within his rights” to take legal action in states where he feels there was fraud.