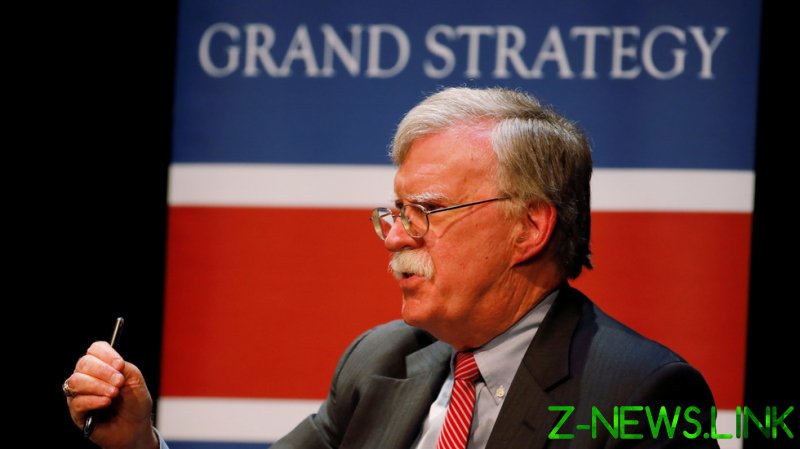 Invited onto the Washington Post’s ‘Please Go On’ podcast on Friday to expand on his proposed “solutions” to the “problem” of Afghan withdrawal as set out in an op-ed for the paper earlier this week, Bolton began by sneeringly dismissing the idea that the US could ever truly leave Afghanistan in the first place.

“All of Central Asia is like a big pile of pickup sticks,” he told the interviewer, “and they say, ‘Hey, we’re going to take that American stick out of Afghanistan and nothing else will happen anywhere else.’ Completely wrong, and we’re seeing the consequences of it now.”

“I think there are things that are going to happen that we can’t even foresee at the moment that aren’t going to be good,” the mustachioed warmonger continued threateningly.

Bolton warned the return of the Taliban to power in Afghanistan – something that had been anticipated and even planned for months, yet somehow in his view the equivalent of an unconscionable sneak attack – could lead to the sudden radicalization of Pakistan’s government, which, given its stockpile of nuclear weapons, would clearly be unacceptable. Some of those weapons could fall into the hands of terrorists, he suggested, who could carry them anywhere – even across the Mexican border. Any inkling that Islamabad “appears ready to transfer nuclear capabilities to terrorists” should result in “preventive action,” he declared.

While admitting this would be “highly unpalatable” (and essentially admitting he had no way of knowing how a move like that might be telegraphed), he laid out a range of tactics more likely to bring about the radicalization of the Pakistani government than to prevent it. “Make it clear to civilian leaders that Pakistan will pay a very dear price” if “they don’t cut off aid to the Taliban,” he suggested, arguing the US should make its own aid to Islamabad contingent on their cutting off aid to the Afghan Taliban. Washington should also ditch Pakistan from the “major non-NATO allies” list, impose sanctions, and accelerate its “tilt toward India” – Pakistan’s long-time nemesis.

As if all this wasn’t likely enough to boost anti-US resentment in the region, Washington should put China on notice that any misuse of Pakistan’s nukes would be considered Beijing’s fault, Bolton said, further drawing out the scope of preemptive punishment. He acknowledged Washington might lose out to China in the race to influence Pakistan due to Beijing’s ability to build Pakistan’s ports and construct “beautiful roads” and pipelines capable of carrying oil and gas directly into China without having to pass through any US-controlled areas.

And as for the withdrawal itself, Bolton blamed the last three presidential administrations for failing to normalize the expenditure of trillions of dollars and thousands of lives on a doomed nation-building project, noting that while “withdrawing from Afghanistan” polled well among Americans, it didn’t poll as well when respondents were told the Taliban would be rushing in or that Al-Qaeda would set up shop again. Complaining that forever-wars aren’t “like D-Day every day,” Bolton sulked that the country just needed to get to know them a little better.

“Sometimes there’s a utility in a dramatic change to wake people up,” he said ominously. “That may be helpful as well.”

Bolton expressed concern over ISIS-K, the local chapter of the Islamic State terrorist group (IS, formerly ISIS), observing that the Kabul airport could easily be taken out of commission if a plane was taken down on its main runway.

Asked if “heads should roll” – metaphorically, presumably – over the exit snafu, Bolton laid the blame completely at President Joe Biden’s feet, declaring “This is his decision, and he’s going to have to bear the consequences. It’s a disaster.”

Pakistan’s National Security Advisor Moeed Yusuf responded to Bolton’s call for essentially moving the Afghan war across the border (the area being too good of a vantage point over Iran to give up, according to Bolton, who called Washington’s perch in Afghanistan a good “insurance policy”) with a plea for the two countries to repair their relationship, noting they had common goals.

For Islamabad to reach out an olive branch to the US so soon after being drone-bombed by them under former President Barack Obama might come as a surprise, though both nations do have an interest in keeping IS and other terrorist groups out of Pakistan. The group took credit on Thursday for the suicide bombing at the gates of Kabul airport that left at least 175 dead, including 12 Americans.