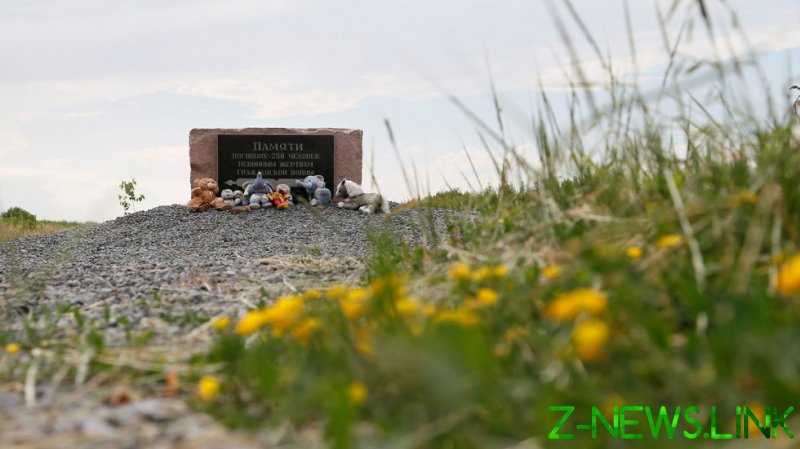 Almost as soon as the terrible news came out on 17th July 2014 that a passenger airliner had come down over eastern Ukraine with the loss of all 298 people on board, the fingers of blame in the West were pointing at Russia, and the Kremlin was declared guilty until proven innocent.

‘Putin’s Missile’ was the headline of the Sun newspaper, implying that the Russian President had personally fired the missile which allegedly downed the airliner. ‘MH17: Can Russia be held to account?’ asked The Economist – again implying it was a foregone conclusion who was responsible.

Russia’s guilt was already established – before any inquiry was held – and even saying ‘let’s wait a while before we see more evidence’ could bring you under attack as part of ‘Putin’s lie machine.’

That has more or less been the case ever since.

Just eight days after the tragedy, the Dutch Foreign Minister Frans Timmermans said the EU would widen its already existing sanctions on Russia on account of the crash. The explanation for the disaster was simple. The plane had been shot down by separatist rebels in eastern Ukraine who had been armed by Russia. End of Story.

Since 2014 we’ve had investigations into the crash by the Dutch Safety Board and the Joint Investigation Tim (JIT) – which included Ukraine.  But, as the Kremlin has stated, both appeared to have started off from the premise Russia was guilty, and worked backwards from there.

Those who weren’t prejudiced against Russia – and simply wanted to get to the truth without fear nor favour, saw clearly what was happening. “We are very unhappy, because, from the very beginning, it was a political issue on how to accuse Russia of the wrongdoing. Even before they examine, they already said Russia. And now they said they have proof. It is very difficult for us to accept that.” was the view of the Malaysian Prime Minister Mahathir Mohamed. “As far as we are concerned, we want proof of guilt … but so far, there is no proof. Only hearsay,” he added. “I hope everybody will go for the truth.”

The fact that Malaysia, the country whose airliner was the one lost in the tragedy, believed there was ’no proof’ of Russian guilt should have been front-page news in the West, but of course it was ignored because it didn’t fit the dominant anti-Russian narrative.

In 2018 Russia agreed to hold trilateral consultations with the Netherlands and Australia but it was clear that the aim of these consultations was only to try and make Russia admit guilt – and in the process make it liable for compensation to the relatives of the crash victims.

Proof of this is the fact that the Dutch government did not even wait for the preliminary results of these consultations before taking Russia to the European Court of Human Rights in July, for its ’role in the downing’ of MH17.

The only surprise is that it’s taken Russia three months after that incredibly provocative act to quit the consultation.

Today’s news of Moscow’s withdrawal from the trilateral process will inevitably be spun as further evidence of Russia’s guilt, but the fact remains that the Kremlin has called for a ‘full, thorough and independent investigation’ into the crash, in line with UN Security Council 2166.

How could anyone who is genuinely concerned to find out what really happened on that fateful day six years ago object to that? Any full, thorough and independent investigation into the disaster needs to go beyond the ’how was the airline brought down’ question – as important as that is – but also seek to answer the utterly baffling question of why Ukraine did not close its air space for civil aviation over the armed conflict zone in Donbass. As Oliver Boyd-Barrett puts it in his must-read book ‘Western Mainstream Media and the Ukraine Crisis: A Study in Conflict Propaganda,’ “If Russia had provided BUK missiles with a range of 70,000 feet, as known to both Kiev and Washington beforehand, why was MHI17 ordered to fly within their range? And why did the Ukrainians have their own BUKs in eastern Donetsk?”

The fact that MH17 was able to fly over a war zone where missiles were being fired on a regular basis is something that those keen to blame Russia prefer to gloss over.

If we look at the geopolitical battles of the 2010s, the MH17 tragedy was one of the crucial milestones ratcheting up the demonisation of Russia by the Western pro-war neocon faction, in pursuance of Cold War 2.0. That neocon faction was particularly angry with Russia in 2014 for thwarting regime-change plans in Syria.

If we ask the classic Cui Bono? question in relation to the MH17 tragedy, the answer is clearly not Russia. Six years on, there are still more questions than answers regarding the crash. We need to get those answers, in order for justice to be done.