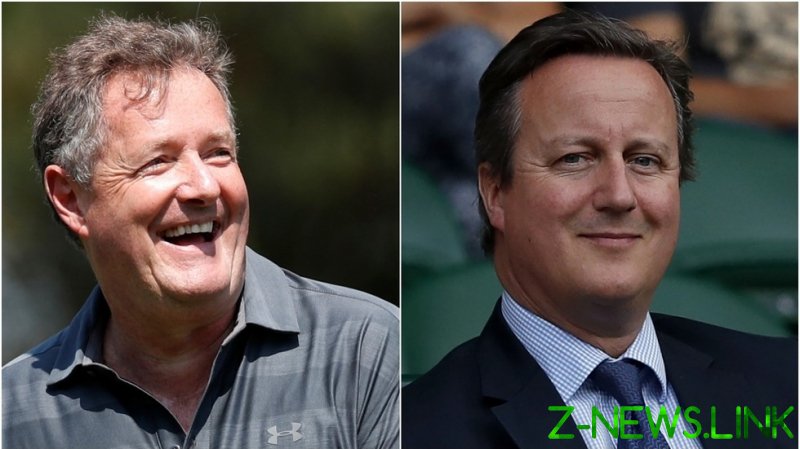 “This is shameful sleazy conduct by @David Cameron,” Morgan wrote on Twitter, adding that it was “disgraceful” for the former PM to seek profit during a pandemic.

Cameron, who served as the British prime minister between 2010 and 2016, faces criticism for lobbying on behalf of financial services firm Greensill Capital, which was trying to secure government-backed loans and a contract for a payment app with the NHS. The company was founded by Australian banker Lex Greensill, who was Cameron’s adviser during his tenure as PM.

After Cameron left office, he became an adviser for Greensill. The company ran into financial problems and collapsed last month.

The controversy also threw shade on Health Secretary Matt Hancock, who the UK media said had a private drink with Cameron and Greensill in 2019 as part of a lobbying effort for the NHS app. A government spokesperson told reporters this week there was no misconduct in Hancock’s actions and that ministers “have no involvement” in awarding such contracts.

Secretary of State for Environment Charles Eustice told Sky News on Sunday that he did not believe Cameron had violated the law. “He meticulously observed the rules that he himself actually put in place after some concerns around lobbying a decade ago,” Eustice said.

Eustice’s remarks were in stark contrast with the reaction of Labour Party Shadow Communities Secretary Steve Reed, who called the situation with Greensill “quite shocking.”

“The era of Tory sleaze is well and truly back,” Reed told Sky News. He added that the text messages between Cameron and Chancellor of the Exchequer Rishi Sunak may be “a breach of ministerial code.” Similar accusations against Sunak and Hancock were made by high-ranking Labour MPs Anneliese Dodds and Angela Rayner.

According to the UK media, in April 2020 Sunak wrote to Cameron that he had “pushed the team” to explore the possibility of Greensill getting a loan under the government’s emergency Covid-19 loan programme.

A spokesperson for Cameron said the former PM will cooperate with the inquiries and provide the necessary information.

Cameron himself said in a lengthy statement that it was a right thing to “make representations” on behalf of Greensill in order to secure a loan, and that it was “also appropriate” for the Treasury to consider the loan. The former politician said he played no part in decisions concerning the loan and its terms, and that the role of Lex Greensill as his adviser has been greatly exaggerated. He added that he was contracted to work for Greensill for just 25 days per year.