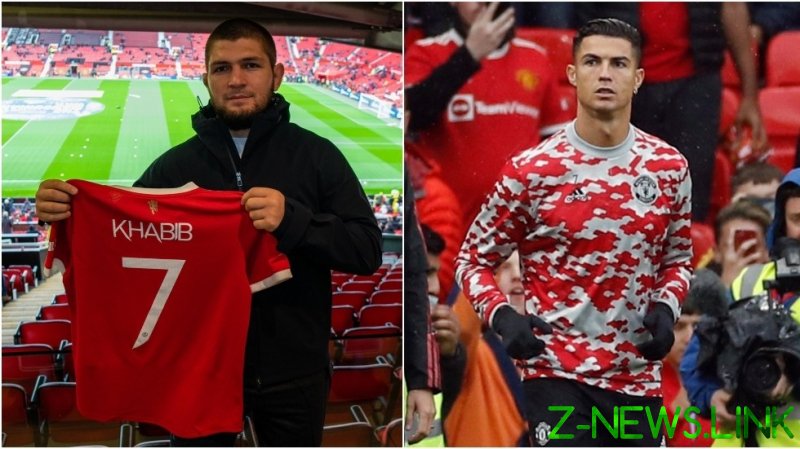 Football-mad former UFC lightweight king Khabib is making the most of his promotional tour in the UK, taking the time to visit United’s famous stadium as they take on high-flying Everton.

A win for either team will see them move to the top of the table, at least temporarily before the rest of their rivals are in action across the weekend.

United welcomed Khabib to the Theatre of Dreams, sharing an image on their social media accounts of the Russian MMA megastar proudly posing with a United shirt with ‘Khabib 7’ on the back.

However, any hopes that Khabib had of watching United’s actual number 7 start the match were dashed when the teamsheet showed Ronaldo was only among the substitutes.

Many will still fancy the 36-year-old star to feature at some point, not least because of the instant impact he’s had since returning to the club in a shock summer move from Juventus.

Ronaldo has netted five goals in five games thus far, including a dramatic injury-time winner at Old Trafford in the Champions League fixture with Villarreal in midweek.

“Wednesday was a big effort, big emotional and physical output so needed to freshen it up,” said the Norwegian, explaining his line-up.

“The start of this game is very important, we’ve got big players coming on too, we believe it’s a team that can take charge of the game.”

Khabib and Ronaldo are well-known pals, with the Dagestani phenom previously posing with the footballer during his Real Madrid days and even recently revealing that Ronaldo had given him an inside scoop on his return to United before it was announced in the summer.

After United posted their image of Khabib, 33, on social media, some fans joked they’d like to see the Russian submission specialist take on Solskjaer after the game, with the Norwegian under pressure to deliver silverware with his star-studded squad this season.

“Khabib vs Ole after FT. Who says no?” joked one Twitter user.

“Khabib about to go 1 on 1 with Ole because of this team selection,” said another, miffed at Ronaldo’s absence from the Starting XI.