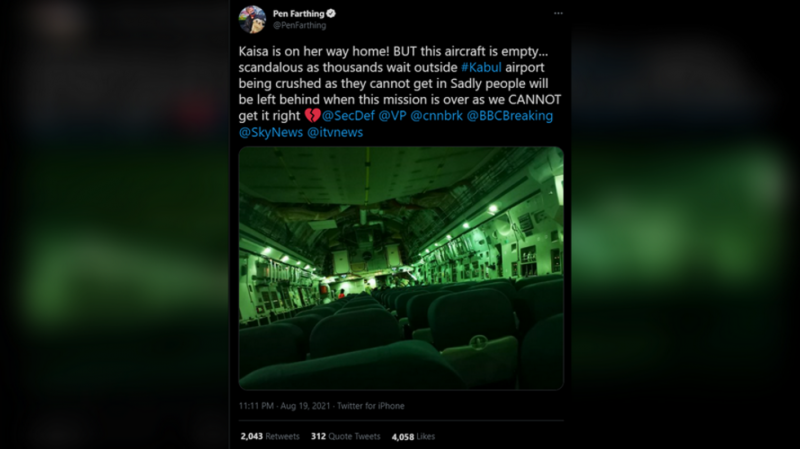 Paul ‘Pen’ Farthing, a former Royal Marine commando who operates an animal shelter in the Afghan capital, shared a photo snapped by his wife apparently showing the interior of a military transport plane involved in the ongoing evacuation operation.

The dimly lit aircraft was almost completely empty, with rows upon rows of unoccupied seats.

“Kaisa is on her way home,” Farthing tweeted on Thursday, referring to his wife. “BUT this aircraft is empty… scandalous as thousands wait outside #Kabul airport being crushed as they cannot get in Sadly people will be left behind when this mission is over as we CANNOT get it right.”

Farthing later told Sky News that he and his wife, a Norwegian national, headed to the airport at night in order to avoid large crowds that have gathered in front of the air hub since the capital was seized by the Taliban on August 15.

His wife had decided to leave Afghanistan for her native Norway, while Farthing has opted to stay behind, vowing to remain in the country until all 71 of his Afghan employees are evacuated with their families. She was lucky enough to get a seat on a flight out of the country but was apparently surprised that she was one of the only passengers.

Britain’s Ministry of Defence said that the nearly empty aircraft was not theirs, Sky News reported.

According to the ex-marine, planes are taking off from Kabul airport every hour “regardless of whether they’re full or not.” At the same time, many people are unable to even reach the airport, as the Taliban steps up patrols and checkpoints around the city.

“We are going to leave people behind, that is an absolute given,” Farthing said while describing the “heartbreaking” situation in the capital.

This is an absolute screw-up of an evacuation. We are going to be watching some absolutely horrific scenes.

Farthing said he was dreading having to return to the airport, explaining that he didn’t know how he would be able to secure safe passage for himself and his remaining staff.

Like its Western allies, the UK has faced criticism for not acting sooner to evacuate citizens and refugees as the Taliban closed in on the capital. Armed Forces Minister James Heappey has promised that the British military would work to get “as many people out as possible,” while conceding that it will be impossible to evacuate everybody. He said that the “air bridge” out of Afghanistan could continue for at least another 48 hours, and that the British government hoped to evacuate around 1,000 people per day.

Ministers had previously denied that nearly empty RAF aircraft were leaving Kabul, according to the Telegraph.

Meanwhile, around 125 Afghans hired to guard the British Embassy in Kabul were told they would not be evacuated because they didn’t work “directly” for London, the Guardian reported on Thursday.

The United States has also struggled with evacuating its citizens while turning away Afghans seeking a flight out of Kabul. US residents stranded in the Afghan capital were informed that evacuation flights were on a first-come-first-served basis and that the US government could not ensure safe passage to the airport.

At least 12 people have reportedly been killed in and around the airport since the Taliban captured Kabul on August 15. Several victims are believed to have been shot, while others may have died in a stampede. At least two people allegedly perished after trying to cling to the outside of a plane taking off from the airport. US military forces are currently in charge of guarding the air hub.