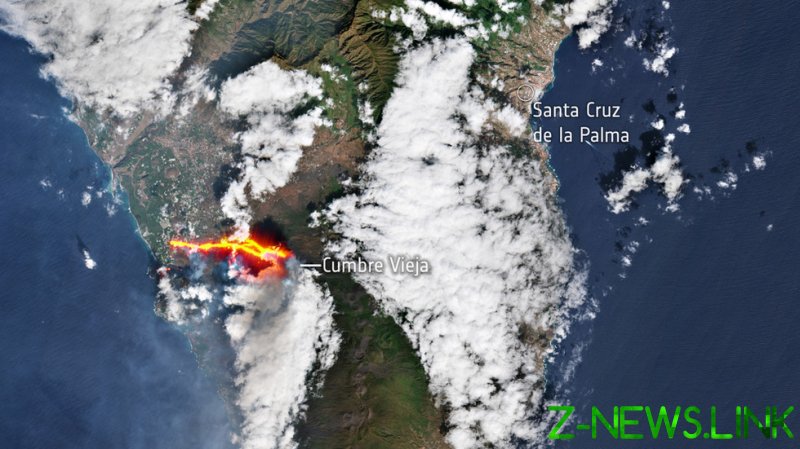 The plant was reportedly engulfed on Monday, sending massive clouds of smoke billowing into the air. Authorities have urged locals to go into lockdown.

Residents in the towns of El Paso and Los Llanos de Aridane have been told to stay indoors with all windows and doors closed to avoid breathing in toxic fumes arising from the plant’s destruction.

The total area affected by the volcano’s lava grew by 10% overnight, Miguel Angel Morcuende, the technical director of the Canary Islands Volcanic Emergency Plan, said, according to Reuters.

The volcano has been erupting for weeks now and has destroyed over 1,000 buildings, the Canary Islands Volcanic Institute has reported. Approximately 6,000 of the island’s 80,000-plus population have been evacuated to date, and the airport was closed last week due to volcanic ash.

The European Space Agency (ESA) has released a photo revealing that the lava flowing from the volcano can actually be seen from space. The image was processed in true color and used “the shortwave infrared channel to highlight the lava flow,” the ESA said.

“Lava flow, with temperatures up to 1240°C, destroyed the few remaining buildings still standing north of the Todoque neighbourhood,” the agency wrote in its report on the photo.

The molten flow has streamed towards the sea, destroying most houses in Todoque, as well as banana and avocado plantations.

The Cumbre Vieja eruption began on September 19, the first disaster of its kind on the island since 1971.