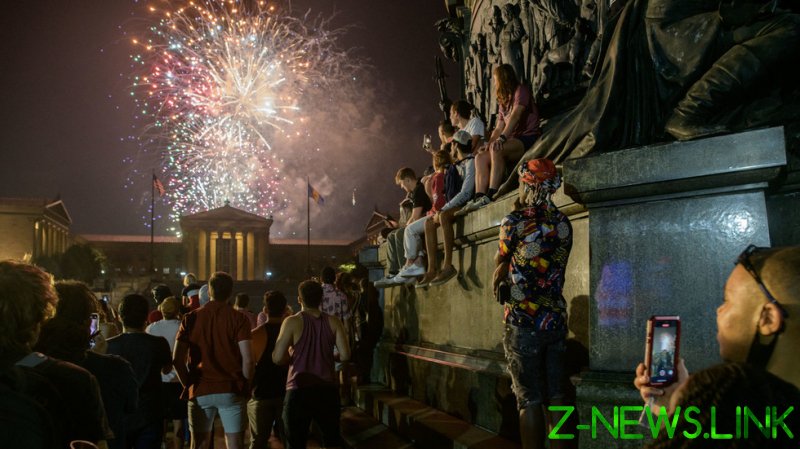 Two young men in their early 20s were killed and a 16-year-old girl was injured when a gunman or gunmen fired into the crowd at a party Sunday night outside a store in west Philadelphia, the local NBC News affiliate reported, citing police investigators. An estimated 90-100 shots were fired, leaving bullet holes in cars, windows and storefronts.

One of the victims was a 23-year-old shop owner who hosted the party, a Fourth of July cookout. The shooting occurred just as a fireworks display was peaking, NBC reporter Randy Gyllenhaal said.

Philadelphia, nicknamed the “City of Brotherly Love” and the place where the Declaration of Independence was signed, had at least two other fatal shootings of young men overnight Sunday-Monday. The city has had 281 homicides so far in 2021, up 37% from the same time last year, according to police data. That follows a year in which murders jumped 40%.

Philadelphia is not alone in the recent trend – or in having a horrifically violent Independence Day holiday weekend. In Chicago, 92 people were reportedly shot, including 16 fatally, between Friday and early Monday morning. Just since Sunday afternoon, six children were shot, the Chicago Sun-Times said.

Just as in Philadelphia, the incidents included a case of people firing into a crowd and killing two young men. Four people were wounded during that shooting, which occurred around 1 a.m. on Monday. A 12-year-old girl and a 13-year-old boy were among those injured.

Two police officers also were shot, taking fire as they tried to disperse a crowd at about 1:30 a.m. on Monday. Police said the two officers suffered non-life-threatening injuries. The city had about 1,900 shootings in this year’s first half, up 12% from 2020’s torrid pace.

One of Chicago’s most famous residents, the Rev. Jesse Jackson, hosted his own Independence Day cookout, where he called on Mayor Lori Lightfoot and other city officials to work together to reduce gun violence. “Stop finger-pointing and embrace each other,” he said.

Mass shootings also were reported over the weekend in such cities as Dallas, Cincinnati and Omaha, Nebraska. Philadelphia and Chicago both had multiple mass shootings. US homicides jumped 25% last year, and the Council on Criminal Justice reported that murders in 32 major American cities rose 24% in 2021’s first quarter.