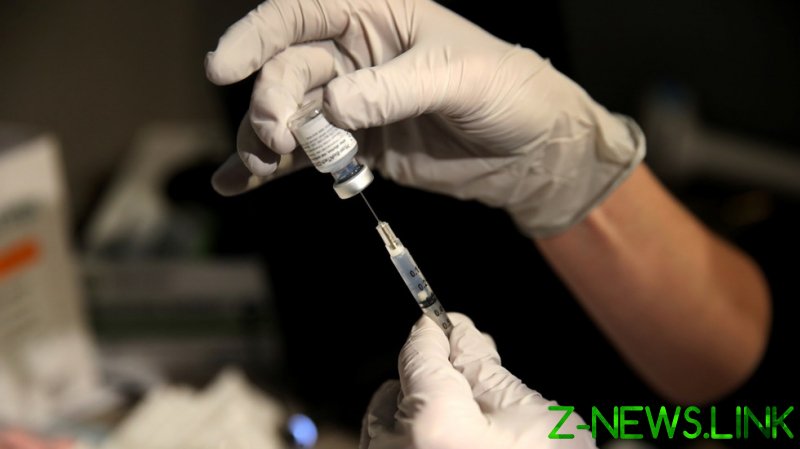 The afflicted individual remains in the hospital on Wednesday after suffering a powerful reaction Tuesday, three sources who had seen official reports of the victim’s health told the New York Times. The workplace or residence of the health worker have not been disclosed, nor have any more details about their health status been released, and it’s not clear if they had other, non-medical allergies, one of the sources explained.

They also added that “there were no safety signals of concern identified in our clinical trials, including no signal of serious allergic reactions associated with the vaccine.”

The reaction was reportedly similar to the anaphylactic shock suffered by multiple healthcare workers in the UK, where the Pfizer-BioNTech jab was approved earlier this month. One of the stricken British women had a history of egg allergies, though the manufacturer has insisted there are no egg-related ingredients in its formula, and the other was said to be allergic to certain medications. The UK also reported a “possible allergic reaction” in a third recipient, though the incident was not described in detail.

UK health authorities have warned people with any history of “anaphylaxis to a vaccine, medicine, or food” away from getting the Covid-19 shot and suggested that facilities set up to administer the vaccine be equipped with “resuscitation equipment” – guidance echoed in Pfizer’s own prescribing information.

While the company did not report any allergic reactions among clinical trial participants, individuals with medical allergies and anyone who had ever suffered a “severe adverse reaction associated with a vaccine” were specifically excluded from the trials, and doctors were advised to watch for such reactions so that the allergic could be routed out of the studies.

The Food and Drug Administration (FDA) issued an emergency use authorization for the Pfizer-BioNTech vaccine on Friday, making the US the sixth country to approve the formula. The first 2.9 million doses began shipping to administration sites on Sunday. Monday saw the first two American healthcare workers receive their shots in New York City.

The authorization is for adults aged 16 and up, and providers have been advised against giving the vaccine to anyone with “known history of a severe allergic reaction” to “any component of the vaccine.” Frontline healthcare workers and care home residents will be first in line to receive the shots.

The UK approved the vaccine earlier this month, the first country to green-light the use of an mRNA-based inoculation, and is aiming to have 800,000 residents vaccinated by the end of the year. Authorities, however, have complained that low-income and minority populations are less likely to express confidence in the vaccine compared to higher earners, blaming targeted anti-vaccine “misinformation” for the statistics.

While the British Medicines and Healthcare Regulatory Agency has insisted it has a “robust and proactive safety monitoring strategy for Covid-19 vaccines” underway, the agency’s contract with an artificial intelligence firm to “process the expected high volume of Covid-19 vaccine adverse drug reactions” has not inspired confidence in skeptics.

Other countries, including Canada, Mexico, Singapore, and Bahrain, have also green-lighted the Pfizer shot. The US is expected to take the Moderna jab under consideration next. It is another mRNA-based vaccine, this time from a company that has never successfully brought a drug to market.