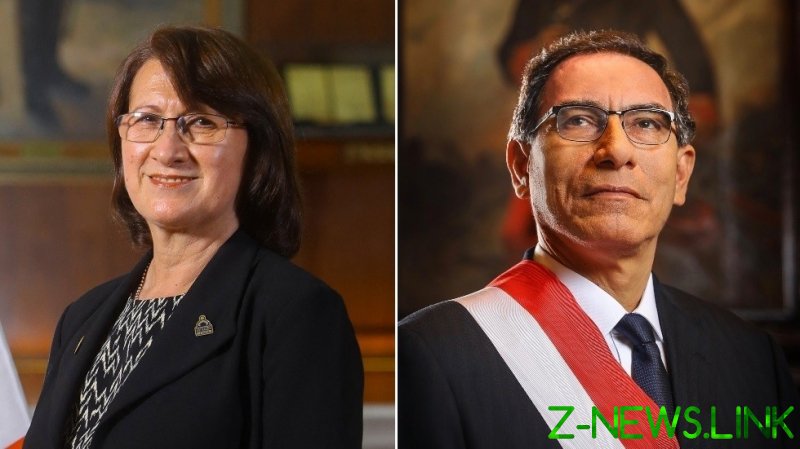 Dr. Pilar Mazzetti resigned her office on Friday night, a day after testifying before the Peruvian Congress about her former boss’ alleged inoculation. It came amid rumors on social media that she may be formally censured by the lawmakers over the scandal.

Peru started its national immunization effort on Tuesday, days after receiving 300,000 doses of the Covid-19 vaccine produced by the Chinese pharmaceutical company Sinopharm. The deployment was preceded by a clinical trial that involved 12,000 volunteers, who were injected with either the vaccine or a placebo.

Martin Vizcarra, the former president of Peru, claims he received two jabs in October as part of this trial. He said his participation in the experiment was “brave” and went against the advice of his own prime minister, who Vizcarra claimed was concerned with the potential risk of the vaccine.

“When I made the decision to be part of the 12,000 volunteers, obviously I asked my wife if she wanted to join me in that decision and she did,” he said at a media conference on Friday, adding that he didn’t know whether he and his spouse were given the vaccine or the placebo.

The public confirmation came after a Thursday exposé by the newspaper Peru 21, which painted a rather less noble picture of what had happened. The report said he ordered that he and the first lady be injected with the vaccine, effectively jumping the line, and made efforts to cover this up. The newspaper rejected Vizcarra’s claim that participants of the trial had to keep their participation confidential, which was his explanation for not disclosing his involvement.

Mazzetti, the now-former health minister, told lawmakers she was not aware of Vizcarra’s alleged vaccination, and that a top official would not normally be part of a clinical trial. Some other members of his former cabinet made similar remarks, saying they didn’t know about the jabs before the exposé came out.

Ironically, Vizcarra received the second dose of whatever he was injected with less than two weeks before being impeached. Congress voted him out of office on November 9 on a charge of “moral incapacity” to lead Peru due to corruption. Mismanagement of the Covid-19 epidemic was a major factor in his downfall, which happened two months after a first unsuccessful impeachment, during which lawmakers failed to convict Vizcarra of influence-peddling.

Mazzetti was the fifth health minister in the Vizcarra government, which lasted for less than three years, and transitioned to the new cabinet. She will be succeeded by Dr. Oscar Ugarte Ubilluz, who is scheduled to be sworn in on Saturday, according to local media.

Peru, a country of 33 million people, has over 1.2 million confirmed Covid-19 cases and more than 43,000 recorded deaths. Healthcare workers are given priority in the immunization effort.

Incumbent President Francisco Sagasti received his first jab on the first day of vaccination in what his office called a confidence-building move meant to encourage Peruvians to take the vaccine. He called it “the best shield” against the disease. In addition to Sinopharm’s vaccine, Peru has signed agreements for Pfizer and AstraZeneca jabs.