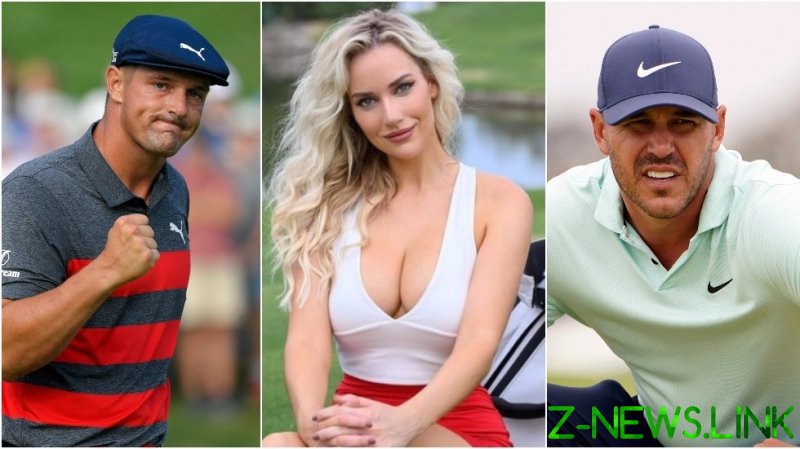 The ex-pro golfer and social media sensation took to Twitter to voice her wishes for the epic competition against Europe, which will be played at Whistling Straits on the shores of Lake Michigan in Wisconsin from Friday onwards.

“Bryson/Brooks would be an unstoppable team. Pair them together. It’s what we all want,” she wrote.

In 2018, Koepka complained that DeChambeau was taking too long between shots and said it was driving him “nuts”.

DeChambeau has also mocked his rival’s physique after he did ESPN’s Body Issue, and Koepka posted a picture of his four major trophies as a response.

More recently in May this year, while doing an interview at the PGA Championship, Koepka complained about noisy spikes on DeChambeau’s shoes as he walked behind him.

In a viral video, he told his interviewer: “I lost my train of thought, yeah. Hearing that bullsh*t.”

Though now backing their union, stunning Spiranac quipped that she would “pay an unlimited amount” to see the men physically settle their differences.

In the build-up to the sport’s most prestigious team tournament, however, Koepka has attempted to defuse the row this week.

“A lot of this social media stuff has definitely been driven by a lot of external factors, not necessarily us two,” he said.

“We had some great conversations during Tour Championship week when we had dinner. Then this week I sat down and had dinner with him last night, and it was fine.

“I think there may be something fun coming up here moving forward, but won’t speak too much more on that,” Koepka concluded.

Postponed from last year and therefore named Ryder Cup 2020 like other delayed spectacles such as the football European Championships and the Olympics this summer, this edition will be the 43rd in golfing history.

Stricker, who may not heed Spiranac’s advice, will attempt to win back the crown for the Americans after Europe won in France in 2018.

The US restored pride on home soil in Minnesota in 2016.

But this century, save for another rare American victory in Kentucky in 2008, has mostly seen European dominance with the outfit this time led by Padraig Harrington lifting the trophy seven times out of a possible nine.