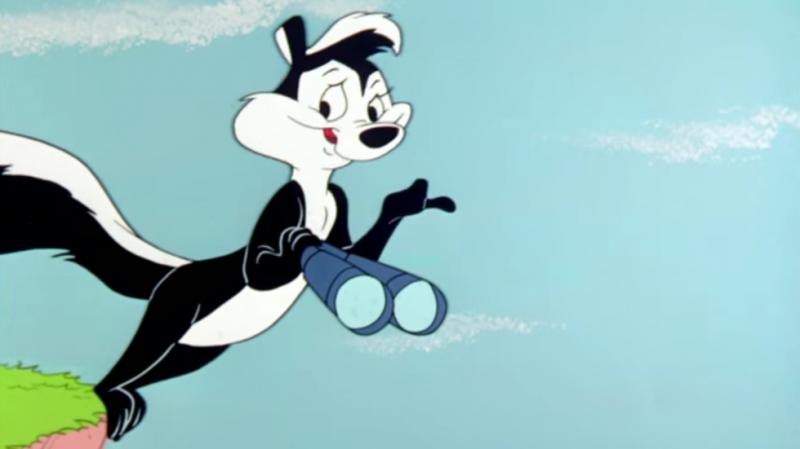 New York Times columnist Charles Blow opened up a new front in the never-ending culture wars over the weekend, when he accused Pepe Le Pew, the cartoon skunk whose failed attempts to woo women always land him in trouble, of perpetuating “rape culture.”

Though the running gag is that Pepe, oblivious to his own repulsive stink and behavior, never succeeds in his romantic endeavors, Blow still insisted that Pepe “helped teach boys that ‘no’ didn’t really mean no” and that overcoming a woman’s physical resistance was “normal, adorable, [and] funny.”

Amid the cartoon controversy, Deadline revealed on Sunday that a scene involving Pepe had already been cut from Warner Bros’ upcoming sequel to ‘Space Jam,’ the beloved part-animated, part-live-action adventure from 1996.

The cancelation “has nothing to do” with Blow’s anti-Pepe crusade, Deadline stressed.

Filmed in 2019, the scene was dropped when director Malcolm D. Lee took over the movie after Terence Nance left the project that summer. The scene starred ‘Jane the Virgin’ actress Greice Santo alongside Pepe, and was described as a black-and-white spoof on ‘Casablanca.’

In it, Pepe attempts to kiss a woman played by Santo, who pours her drink on him and slaps him in response. Basketball star LeBron James then enters the bar with Bugs Bunny, in search of Lola Bunny. After Pepe tells the pair that Penelope Cat – the long-suffering object of his affection – has a restraining order against him, James scolds Pepe, telling the skunk that he “can’t grab other Tunes without their consent.”

Santo is reportedly upset with the cancelation, especially as it showed Pepe getting taught a lesson in boundaries. Speaking to Deadline, a spokesperson said that Santos is disappointed that she no longer has a chance to “let younger girls and younger boys know that Pepe’s behavior is unacceptable.”

While Pepe is now lumped in with the Harvey Weinsteins and Kevin Spaceys of the world, he is not the only Looney Tune to come under fire for his behavior. References to firearms have also been purged from a reboot of the iconic cartoon series, producer Peter Browngardt told the New York Times last year. In the newly-sanitized Looney Tunes, Elmer Fudd no longer hunts Bugs Bunny with a shotgun, but with an equally-deadly scythe. Yosemite Sam was also stripped of his trademark revolvers, but comically large stacks of dynamite and ACME anvils are still fair game.