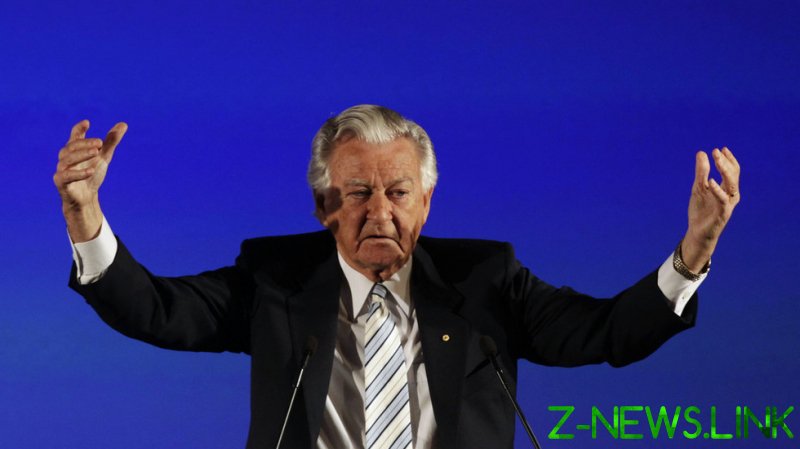 The shocking disclosure was made by academic Cameron Coventry, who analyzed diplomatic cables from official archives, and found that, while serving as leader of the Australian Council of Trade Unions (ACTU), and President of the Labor party, the man who would later be known as the “people’s Prime Minister” passed on sensitive information about the government, the trade union movement and more to Washington over many years.

The precise points at which Hawke’s secret spell as an informant commenced and ended aren’t clear from the unearthed documents, which run from 1973 to 1979. In his analysis, Coventry notes that numerous “notable” Australians maintained clandestine ties to US officials in the same period, among them government ministers, state premiers, and political party leaders. However, the “sheer volume of cables” pertaining to Hawke’s dealings indicate that he was “especially entrenched in the practice,” to a degree that was “unusual.”

Hawke’s motivations for entering the arrangement aren’t clear from the files themselves, although the academic suggests he sought to “[persuade] the US that he could be trusted as leader” as he prepared to enter parliament, so “promised” to keep diplomats abreast of everything and anything of possible concern to Washington.

True to his word, he provided a regular flow of “reliable” intelligence to prove he could be depended upon, including advance warning and insider information on planned strikes and industrial action by workers at major US corporations operating in Australia. He even reported on meetings conducted abroad with influential figures and groups, including the UK Labour Party. Eerily, the cables make clear he was, presumably unknowingly, surveilled closely by US intelligence throughout these trips.

For their part, US diplomats saw much “potential value” in Hawke as a “possible future Labour leader and prime minister,” and a golden opportunity to cultivate him and influence his perspectives and policies along the way. They also “wanted to protect defence installations in Australia,” among other “important” interests.

Feeling he would “benefit from being exposed to some sophisticated non-labour thinking on the role of multinationals in Australian economic development,” it was proposed he be invited to Washington to meet representatives of Chase Manhattan Bank, the International Chamber of Commerce, Brookings Institution, and other organisations and be educated in the merits of the then-burgeoning doctrine of neoliberalism.

“I wish to emphasise how important proposed visit of Bob Hawke to US can be…There is little doubt that he has major potential…he has every prospect of being a major figure on political scene for next 20 years or so, and it will be worth our while to make a real effort to develop a worthwhile program for him,” a May 1974 cable states.

Three months later, another cable spoke glowingly of Hawke, predicting confidently that he would eventually be transformed into the “ideal Australian Labour leader” – news that was no doubt extremely welcome, given at that time the country was led by Gough Whitlam, a considerably less-than-ideal Labor leader from the US’ perspective.

Elected in 1972 on a wave of popular discontent, mass protests, and growing progressive sentiment, Whitlam was a maverick social democrat who made clear his country would no longer be dominated by foreign powers. Within months, he’d abolished royal patronage, recognised the People’s Republic of China, drawn up plans for Aboriginal land rights, ended conscription, and withdrawn all Australian troops from Vietnam, with his ministers referring to the ongoing US war there as “corrupt and barbaric.”

Whitlam owed his victory in no small degree to ACTU, then a highly influential organisation within Australian politics and society. As such, Hawke’s leadership of the Council was of incalculable worth to his handlers, and Coventry notes that, throughout this period, he served to “moderate” and “marshal” the movement according to US interests.

Early on, he’d cautioned diplomats that he may on occasion need to “adjust his rhetoric to the prevailing line” in response to ACTU’s left wing, but reassured them that this was purely for “political survival” – in other words, any radical statements he made would simply be for show. Hawke also maintained warm public relations with the prime minister for show, too – behind the scenes, he “used short words of emphasis not suitable for a family newspaper,” to describe the “difficult,” “stupid,” and “egocentric” Labor leader.

Whitlam’s status as a marked man was starkly confirmed in March 1973, when he instigated unexpected and unprecedented raids on the offices of the Australian Security Intelligence Organisation (ASIO). Launched due to the agency withholding information from the government, investigators uncovered a trove of sensitive information that had been withheld from ministers for decades – among other things, Whitlam learned of Australia’s membership of the ‘Five Eyes’ global spying network for the first time, 17 years after Canberra’s entry.

In response, James Jesus Angleton, the US Central Intelligence Agency’s notorious counter-intelligence chief, concluded the premier was a “serious threat” and unsuccessfully sought to have him removed from office via cloak-and-dagger tactics. It would not be until November 1975 that Whitlam was finally brought down, removed as prime minister upon the orders of Queen Elizabeth II’s representative, Governor General John Kerr, as a result of CIA and MI6 connivance. Plans to parachute Hawke into parliament and subsequently the Labor leadership duly “intensified” at this time, diplomats considering him to have “effectively assumed the role of opposition leader.”

Eight years later, Hawke was elected by landslide, Washington’s man in Canberra at last safely installed in power. Over his terms in office, he fully vanquished any and all vestiges of social democracy in Australia, deregulated its banking system, floated its currency on international exchanges, and became known even among his own ministers for “uncritical support for the US.”

Some details of his double life were made public in April 2013 by WikiLeaks, although they neither dented his public standing nor precipitated any debate about the degree to which foreign powers dictate Australia’s domestic and foreign policies and choose its leaders, and whether this is an acceptable state of affairs. Nonetheless, citizens may do well to consider the words of WikiLeaks’ founder Julian Assange – an Australian currently incarcerated in a high-security prison in London, awaiting extradition to Washington for exposing US war crimes.