Home / policy / People will get angry, if you understand the secret of Putin’s amendments 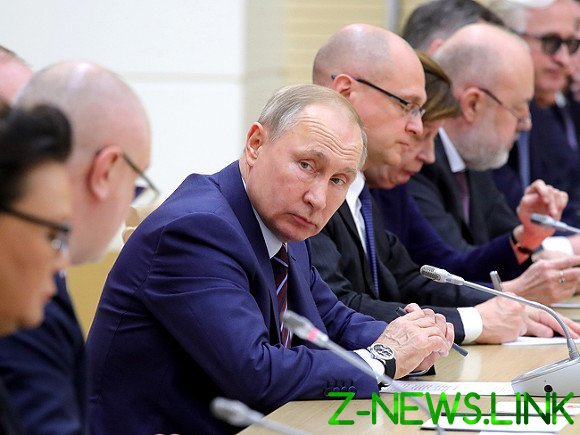 Ordinary Russians to the “constitutional coup” indifferent. However, there is a way to get him out.

“If you thought I made it clear, you wrong understood me”. So I would say the journalists, the legendary head of the American Central Bank Alan Greenspan.

This idea notebook bouncer, whom we commemorate today a bad word in his homeland, is applicable not only to the texts initiated by Vladimir Putin constitutional amendment, but also to all the hype that is around them spins. A careful reading of “correction” of the project does not help, but prevents to understand what is going on.

Analysts have not yet managed to understand even the General plan amendments, summarized a leader in the Arena, and has been declared a working group, which is kind of like on behalf of the whole of Russia will bring them to the condition.

Did not have time to make fun of these singers, jumpers and our other authoritative people constitutionalists, as amended, it is unlikely they at least read, have already arrived in the state Duma.

Before you know it, as the formalities are left behind, and it is only for the popular vote. And drag him will not. Which opens the way to further politbarometer — whether early re-approval of the leader, whether something is a restatement replacement.

For some reasons (unclear, even the long-prepared or suddenly came to mind) Vladimir Putin did not wait for 2024 and only two years after the previous presidential campaign reboots the whole system of government. His personal power, it is necessary to emphasize. This is his personal project. None of the supposedly reformed governing institutions have not asked for these amendments. For them they are a surprise, as for other citizens.

To see this RAID in preparation for Putin’s retirement or semi-retirement not the slightest reason. Note that in recent days the leader did not say anything about their own place in the updated mode. If it is the Putin that we know so far, any reconstruction of the system means that the place will be Central.

Everything else, including a spirited discussion about what these amendments are good or bad for our democracy, only sound accompaniment, designed to distract from the point. So I will not participate in any way in the discussion of new rights and obligations conferred by the links of the power vertical, nor in the debate about whether angrily to protest against the violation of the Basic law. It would be something to trample. He has long been a fiction.

See also:  In Dagestan, security forces severely broke up the women and old men protesting against the construction

Not to say, of course, that the country has absolutely no people vividly were interested in these innovations. For example, a dozen members of the upper house, a kind of honourable senators, will now be personally appointed by the President. It is clear that those who expect to become so immersed in the sweet expectation. And the contenders for the status of the members of the constitutional court, on the contrary, hanged head — because the payroll of the institution will be reduced from nineteen people to eleven.

I think in the whole of Russia spelled out in the new amendments will affect several hundred citizens. But what about those who are not part of them? Do ordinary Russians any reason not to rejoice, but generally interested in the constitutional rewriting?

Say, if the people want to bring in social benefits, supposedly specially made to the amendment. But these assurances — tale, which believe only those who doesn’t need them. About some pension and other post-indexing in the amendment says is so short and unclear that they did not breaking, you can easily cut back on even what we have now. As a bait it wouldn’t work. Except that the regime will commit another zigzag hastily and perhaps something additional subjects.

But until then, unless radical steps are not taken (such as the issuance of 10 thousand roubles to each voting or, say, the visit of Lukashenka to Moscow, to “give Russia its people”), believe that the reaction of the masses to all these great leading lights of a shock can be twofold. Either indifference or irritation.

Ordinary people have not read the Constitution, its value is not considered, no change is requested, the connection between it and their everyday circumstances sees. Therefore, it edit, taken in isolation from the others, easily gets past his consciousness, pulling her quickly and quietly.

See also:  Ukrainians joke on "operational wound" of the people's Deputy of Dade

In this sense, the “popular vote” is a distraction. Apparently, this is required by some invisible items while the scenario of a special operation. Therefore, it is likely that the sites those who can not get away, will come, but in the shower will Harbor evil.

As it has been since March last year. Then the massive forced people to attend responded in the following months, a powerful burst of irritation, for which the reform of pensions has been more of a accelerator than a cause. To pension maneuvers since almost used, and indicators of the princes of individuals and Putin personally was not up.

It almost does not interfere with driving, but it makes it difficult manipulation, aimed at the prolongation of the Putin regime after 2024. Contrary to popular myth, people are not indifferent to the legality of the power of the leader. Only merit it is not a constitutional category, and their notions of justice reign given to them by the benefits and Newcastle stay upstairs.

In these coordinates, the leader has ruled unjustly for a long time, and the benefits — material and spiritual — it is becoming less. As for the dislike of deceit, it is necessary to recall the irritation with which, in 2011 people have taken the reverse exchange of posts between Medvedev and Putin. Personally to Putin treated better than they are now, but the trick, give him back his main seat, then turned around a significant public trouble.

Even more so now.

When the masses realize that all these manipulations are merely fronts for the extension of the power of Vladimir Putin, the prestige of the regime and its leader will go down, no matter what reports may come from the survey of services. The only question is, will happen to be held in April “popular vote” or after it, when the script operation will be impossible to hide.