Home / policy / People peacefully take to the streets, and they answer with silence and lies

People peacefully take to the streets, and they answer with silence and lies 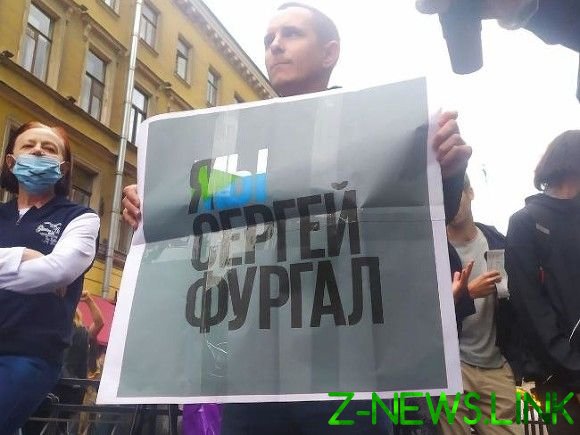 After four days of the Khabarovsk protests need to discuss some important issues.

First, who is now a major in the Khabarovsk territory? Where the Chairman of the Zolochiv Huber? Where the speaker of the regional Duma Tikunova? Where the liberal democratic party?

They do not make any credible statements and directly, without hints, don’t announce to people something which they have a plan of action. Why do they all like the clams?

People the fourth day in a row very peaceful out on the streets, and they answer with silence and lies with the Federal TV channels.

The Federal government is silent, silent, both branches of the regional authorities, the municipal authority is silent. Silent 150 MPs from the liberal democratic party and two of the elected mayor from this party. Guys, Hello, is there anyone of you who will be able to take responsibility and to appeal to the people?

Assembly is very peaceful, but sometimes skirmishes happen with some obscure individuals. If the government continues to be silent, the level of aggression in these skirmishes start to grow, which should be prevented.

The liberal democratic party on Friday promised to apply for an official meeting. Now the environment, the applications are all there. Why are they acting like this? I think they already discuss with Moscow how they work, looking for candidate for the position of Huber and shared positions in the new Cabinet.

Secondly, the government through its spies and agents provocateurs trying to divide the protesters on the topic of is it possible to protest against Putin/Trutnev/or all need to be reduced to slogans like “Freedom to Furgala”.

This is a very stupid layout, because it Furgala — political. This means that the reason of the arrest is not that have made something Huber or didn’t do, but because it is decided by the government. Let us understand what. Could make the decision to arrest a Governor, a General, without knowing the opinions of the President’s administration? It’s impossible. And the administration of the President and the speaker (eye up in the far East) could not know the opinions of Putin on this, otherwise it is possible for the neck to get.

Therefore, for the arrest Furgala meets President Putin personally, and as the Creator of such “law enforcement” system. So debate about it is meaningless. Just yell “Free Furgala”, while it is not clear to whom turning is just stupid and pointless. To whom are you calling, if not Putin? Just in the air to practicalise?

In the four days of protests arose leaders that something good and something bad. Well, that hold a certain, protest is alive in itself. And too bad that for four days there were no clear requirements. If this continues, then there is a reasonable question “why do we even go?”

These questions need to be answered. If there is no leadership of the liberal democratic party, it has to come from below. If it does not occur that the head be tuned or just provocateurs.