Home / WORLD / People of Pompeii were killed in 15 MINUTES by avalanche of ash and gas, not lava, study suggests

People of Pompeii were killed in 15 MINUTES by avalanche of ash and gas, not lava, study suggests 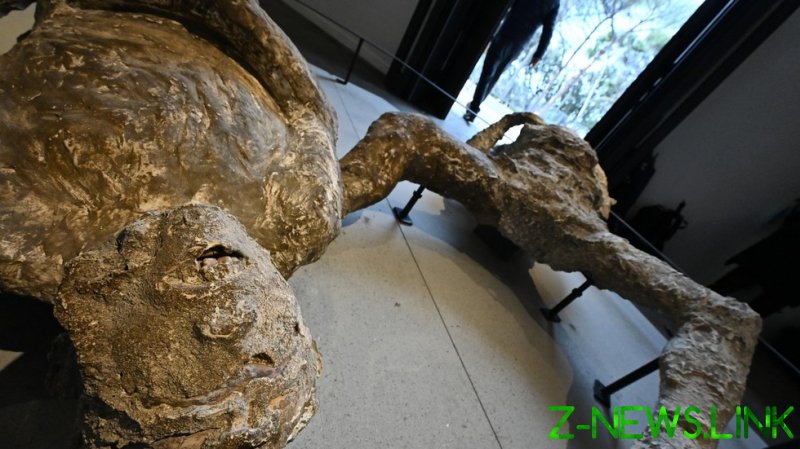 Some 2,000 people died in the city and surrounding settlements when Mount Vesuvius erupted in 79 AD, but they were not overwhelmed by lava but suffocated by a phenomenally fast, up to 450mph (724kmph), cloud of toxic gases and ash, according to researchers from the Department of Earth and Geo-environmental Sciences of the University of Bari.

Together with colleagues from the National Institute of Geophysics and Volcanology (INGV) and the British Geological Survey in Edinburgh, the researchers sought to model the immensely destructive pyroclastic flow, made of solidified lava pieces, volcanic ash and hot, toxic gases.

The flow boasted “a temperature of over 100 degrees and was composed of CO2, chlorides, particles of incandescent ash and volcanic glass,” according to Roberto Isaia, senior researcher at the Vesuvius Observatory of the INGV.

This gas cloud engulfed the city for between 10 and 20 minutes shortly after midnight local time, though the eruption started at 1pm the previous day, asphyxiating many of the doomed inhabitants in their beds and homes.

Some residents of the nearby towns of Oplontis, Stabiae and Herculaneum were also likely killed by the shower of pumice and volcanic rock known as lapilli, though the majority would have suffered an agonizing and terrifying end as they choked to death on the toxic plumes of volcanic smoke.

For residents of Herculaneum, at the foot of the volcano, survival was impossible given the sheer ferocity of the pyroclastic flow’s onslaught. Over the course of two days, the volcano unleashed thermal heat more than 100,000 times that of the atomic bombs dropped on Hiroshima and Nagasaki and carpeted the local settlements in up to 30 feet (9.1 meters) of ash and debris.

This type of research may inform future civil protection initiatives for population centers near the world’s most active volcanoes.