Home / economy / People found out how little he earns

People found out how little he earns 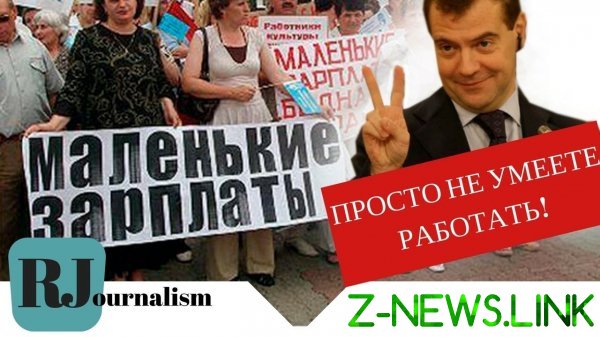 People have suddenly ceased to be content with ridiculing the reports on the “average wage”. It turns out that the more honest numbers hidden not so far.

The broad masses of Russians came into the era of the great discoveries of salary. Media and social networks, as if on command, were filled with arguments about the differences between “average”, “median” and “modal” wages.

The authors — who with a wise smile, and who with vozdevaya hands — told the audience that it’s time to forget about the average salary, which used to brag about the bosses (47,7 thousand RUB) and to realize that the real wage is called the median and its size is considerably smaller (34.3 thousand)

And it was only the first wave. In the last day or two dominance in the information field captured more of the true salary — modal, the insignificance of which (23,5 thousand) will make you wince even a man in cold blood. So it turns out that “get most of the citizens of Russia”.

From myself I will add that it is actually worse. Because those numbers — the so-called wages. But the workers get the money only after the employer will relieve them of personal income tax. Doing this procedure will get a for average, median and modal salaries respectively 41,5 thousand, 30 thousand and 20.4 thousand

Stories about the fifty – or at least sorokiniana salary as a supposedly “standard” people are used to believing propaganda bluff. And absolutely right. But whether the quality of earnings “of the majority of citizens” to take twenty thousand?

No, not worth it.

To begin with, that the primary source of all these sensational figures is produced every two years Bulletin of the Rosstat, the next issue of which is devoted to the payroll classifications in April 2019, just published. Not that the drafters heavily it is advertised, but everyone interested can get to know him.

I note that on the average salaries of state statistics reports on a monthly basis and with a loud voice, and all the rest are less frequent and quieter. Meanwhile, average wages, defined as the arithmetic average of all of the payroll, says only that relatively small part of Russians gets much more than others. The share of the top 20% of employees in total that went, according to the report, labor costs, is 48.3%, while the share of the bottom 20% — 6,2%.

Whether such inequality? I would say that if it is not a by-product of the policies of the government, if it promotes the growth of the wealth of the country and its citizens and does not make the least successful of them into beggars and outcasts, the inequality makes sense. We have in these three items is exactly the opposite. Today, however, are not talking about justice, but only of the poverty and wealth.

So, to measure typical of Russian work, by reporting the values of “average wage” is wrong. Intuition does not deceive citizens. Two-thirds of workers who earn less than “average salary”.

And what about the modal salary?

It is measured like that. Take the whole staircase wages. Pass through it with any interval — say, 1 thousand. figure Out how many recipients fall into each wage interval. For example, in the range from 23 thousand to 24 thousand recipients more than any other thousand-dollar interval. And finally, according to the formula, which I won’t bore readers derive some kind of “modal” figure with the accuracy of the ruble — in our case it is 23.5 thousand

Existential meaning in the modal salary there. Get it, of course, not the majority of workers. In our case it is close to the arithmetic mean wage third bottom ten percent group (22.3 thousand rubles.) This means that about 70% of workers earning more than the modal wage.

So let’s leave connoisseurs “medium” and “modal” and as the main indicator will select the median salary, i.e. one that divides the staircase of salaries exactly in half: half of workers earn less and half more.

The authorities got mixed up in people that this simple as the multiplication table and widely used indicator in the world looks at us with something mysterious. Influential media resource so confident in the ignorance of their readers, which podlupa to the discussion of median wages, respectfully positiveimage economist to disclose to the public the essence of this mysterious figure.

I hope, however, that repeated requests to the experts is not required. Hype rising now in the press around wages, shows that citizens are Mature enough to begin to get acquainted with the real state of the problem.

Among other things, of rostovskih reports they can extract that in April 2019, the median wage was 72% of average in April 2017 72,8%, and in April 2015 — 73,6%. That is, compared to the average, the median goes down, indicating that the inequality of earnings is growing. And it certainly does not help the progress. The stagnation in everything, but only not money issued by a privileged layer.

However, we will not be distracted and verify the figures.

Unfortunately, those 30 thousand get hands on a “median” of that salary, not typical for the whole population of our fellow citizens, and only for employees of organizations that estimated for 2018, worked only 60.6% of the employment. Other economic structure and other employment Rosstat his observations simply didn’t cover. But there is little doubt that official earnings are much lower. Even with the addition of informal labor income, despite the growing efforts of regulatory bodies by the tens of millions of citizens as “organizations” and outside them typical total earnings of the Russians is now unlikely to exceed all same 30 thousand rubles.

A lot or a little? With the understanding that Moscow is the median salary (after deduction of personal income tax) — 57 thousand, and, for example, in the Pskov region — 21 thousand, you will agree that the share of those who at best barely enough for the Essentials, the country is large.

And despite the public crying about the “fight against poverty”, the proportion is increasing rather than decreasing. After all, the economy stagnant and real disposable income (we must remember that they consist not only of wages) decrease for the sixth consecutive year.

The state of Affairs not as bad as it seems to those who in these days have bought into the history about the modal wage, but it is clear that it is wrong. However, consider advantage of people’s desire to understand how things are in reality. Though it appeared.