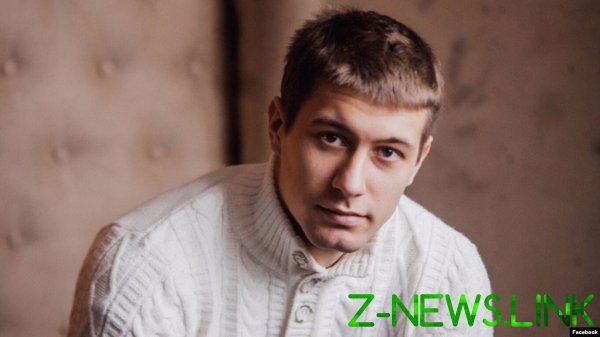 24-year-old physical education teacher secondary school of the village Tomasino Nizhny Novgorod region Alexey Mashkin told me that his colleagues were forced to vote on amendments to the Constitution. Director Shakhunskiy secondary school №1 im. D. Komarov (school of the village Tomasino is its branch) Rifat of Muhametshin sent teachers a letter with a demand after voting to send him a message. The document is available to Radio Liberty. According to Alexey Mashkin, in may he and other teachers of physical culture and OBZH were forced to enroll in voluntary people’s guards to be on duty on the border of the region together with the police and rewritten arriving in Nizhny Novgorod oblast. In an interview with Radio Liberty the teacher told me, as opposed to political pressure, why is buying the balls for his account and what he thinks about the prospects of development of rural schools.

– Why you refused to vote?

– Teachers who did not go to vote and not reported, threatened punitive measures?

– As far as I know, no. Most teachers of our school went to vote because they are afraid to disobey the chief. Not sure what they’re afraid of. Perhaps colleagues want older age to retirement to hold on. Other teachers may simply have used to be afraid of those who are at the top.

– Why are you not afraid?

I used to live according to conscience, and I am confident in their professional competence. I have proved their worth in the eyes of colleagues and parents of students. Me professional have no complaints and can not be. During the lessons I never political issues do not affect, and my political views – it’s personal. I have them in school do not bring, and let officials do not interfere in the policy of teachers. In school, I do not discuss politics, but if you ask me, I’m just saying that you don’t support a vote on the amendments. In my opinion, the election was needed only in order to show the international community how the population supports the current government. It’s window dressing, pure and simple. Wrong in a democratic Russia to nullify presidential terms. And 20 years of rule by one person – is also wrong. Nizhny Novgorod “the Voice” refused to be an observer at the elections, monitor the elections was impossible, and then why participate in them? Best not to pull away. In my opinion, the results of these elections were rigged. 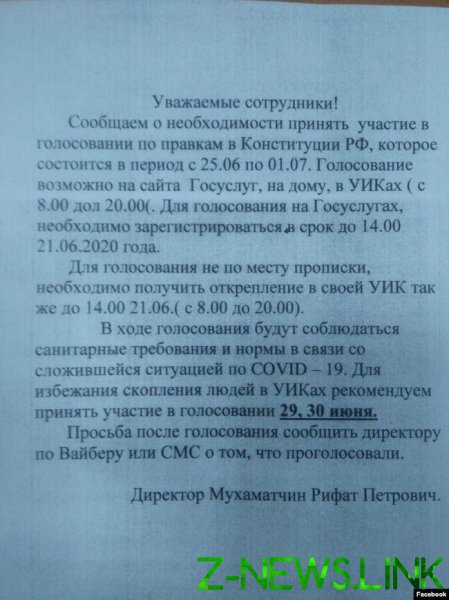 Nobody in my circle voted for the amendment. I – state employees and talked about the amendments with state employees: teachers, police, military. I think that the behavior of the authorities in recent years much has ruined the credibility of the people. For example, in the midst of the isolation of teachers OBZH and physical culture of our region was forced to join the so-called voluntary people’s guards. Teachers had to stand at the entrance to settlements with the police and rewrite visitors from other regions. The Director called me and demanded I joined the squad. I refused, because I didn’t want to risk your health. The Director was yelling at me, saying that I did not serve in the army, and offered to find another job.

Director Rifat of Muhametshin not responded to the request of Radio Freedom to tell his version of events. Your colleagues have fulfilled the requirement to join the squad?

– As far as I know, teachers are not wanted in such squads to join, and even wrote to the Union. But as a result, many agreed, and the entire shift was on duty with the police. I after this incident, the Director reduced the number of hours. Maybe it’s a coincidence, but my colleagues advised me to apologize to the Director – then he can return the watch. I did not do. Work I anyway find. I graduated from the Olympic reserve school and without work will remain. For students and parents hurt. I established good relations with them, and they see my work. In addition, young teachers in rural schools not so much. The youth went to the city, because it neither sees in the villages of the future.

– You participate in opposition rallies and protests?

– In our area, there’s nothing there, otherwise I would participate.

– Why did you decide to become a teacher village school?

– I in this village do not even live. I live in Shakhunya, near the village Tomasino. In the city school, my salary was 12–15 thousand. In the village twice – I teach several subjects: technology, physical education and mathematics. First, to be honest, I decided to go to the school of the village Tomasino for the money, and then I saw how the lives of the village, and was filled with compassion for its inhabitants. They do not want anyone in the government, but she doesn’t need anybody. Rural residents do not live very well. During isolation we switched to distance learning, but most children do not have the Internet and computers. Some even phone is not – one mobile for the whole family. The saddest thing is that people do not even realize how bad they live, and don’t believe otherwise. They go with the flow and not trying to move towards a more dignified life. And I want to make the world better around him to the best of my ability. The previous physical education teacher worked with the children with volleyball, I decided to put together a volleyball team. But volleyballs at school. I wrote the Director an application to purchase volleyballs. The Director said that money from the school for this. Volleyball I at his own expense bought gifts for competitions too. Normal ski school there, but the ski I can not buy. I tried to repair wooden skis, but they engage in very difficult. The school has a lot of financial problems. It is difficult for us to find funds to pay the workers who mow the grass around the school. The trash we pass, to raise money for mowing the grass. The parents we help do not ask, because it is forbidden. And no, the parents of this possibility. Many of my students brought up only a mother, some students don’t have parents – only grandparents. I’m not complaining that I have to spend my money on equipment for work, I to money calmly. I’m more concerned about limited opportunities for professional development. I could think of for their students with interesting and useful information, but how to develop, if in each class of 3–4 students? And we must remember that in our school the children come from the neighboring small villages. Children getting smaller, the village is dying, with only one increase in school funding this will not solve the problem.

– Vladimir Putin has announced a program of assistance to rural teachers “rural teacher.” According to her teachers, who leave to work in the village, promise to pay 1 million rubles.

– In order to get this money, you have to go 200 kilometers from the place of residence. I think this is a very stupid program.

– What is the most difficult to work with rural teachers?

– Difficult to simultaneously conduct lessons in four classes: first through fourth. Understand that children of different ages have different physical skills and abilities. I somehow get out, of course. Technology lessons spend at the boys and girls together. Again the same problem: old equipment and not enough equipment. I come up with something. Sandpaper I at his own expense bought, and reverse lathes to a more modern me is not possible. Everything in my power, I do. For example, I didn’t know how to sew. According to the program of the subject “Technology” I had to teach children to sew. My mother is a tailor, so I learned to sew. Tired of the huge amount of bureaucratic work. Officials flood the school with orders to and require reports. Three times I rewrite the same thing: fill in the electronic diary, a regular magazine and a working program. And this bureaucracy I have to spend more time creative and useful for children work.

– Why do you need these professional challenges? You may transfer to public school or leave the education system to another specialty.

– I guess I am a populist. It is important that children receive useful information in the classroom, to acquire necessary life skills. I always feel that my opportunities for development in the school is limited. But if I leave, it is likely that my place will be a teacher who will sit through the hours until retirement. And I can add children a little joy, maybe by their example, to influence their destiny. The most difficult – to understand that our school sooner or later will close down. Children are smaller, work in the village. Two years ago our school was about to close, and some kids who live in small villages, had to go to public school 17 miles from home. Now our school is a branch school of the Shakhunskiy MBOU SOSH n 1 im. D. Komarov. We were able to defend the school, but I’m afraid that it is temporary. Most difficult, perhaps, to realize that the village is dying, and all the talk the powers that be of assistance to rural schools, in my opinion, does not go into concrete and effective action.

– Vladimir Putin in his speeches regularly speaks about social support of rural schools and rural teachers.

– I do not see that the state supported rural schools. I Express only my opinion based on my experience. My experience as a teacher in a rural school allows you to say that you cannot save the village school, not changing the attitude of the authorities and society to the village. There is no investment in the development of the village – no jobs, no village schools. All people will not be able to move to the big city. Some have no opportunity, other – desires, but for rural children needs to be prospects and future. The problems of rural schools – is a system issue. It is associated with the structure of our state as a whole, against which no arguing, – said Radio Liberty Alexey Mashkin.