‘People above profit’: Thousands take to streets in Brazil, angry with President Bolsonaro in new wave of major protests (VIDEO) 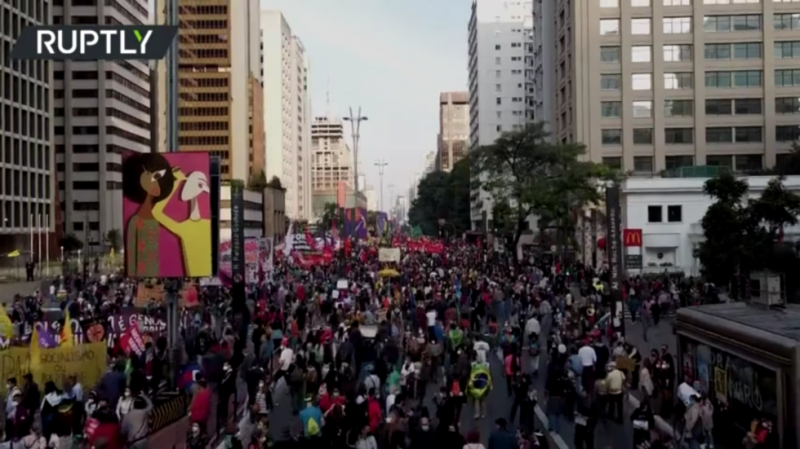 Demonstrations were organized in over 300 locations across Brazil and abroad, local media reported on Saturday. In Sao Paulo, one of the most populous cities in the world, demonstrators flooded the streets, as seen in footage from RT’s video agency Ruptly. They carried huge banners reading ‘People above profit’ and ‘Life, bread, vaccine and education’. Signs demanding the impeachment of Brazil’s president, ‘Fora Bolsonaro’ (Bolsonaro Out), ‘Enough’, and ‘Responsible or useless’ were also seen. While many came with handmade banners, balloons and stickers were also handed out.

“Our people are massacred, our Amazon rainforests are killed by corporatist interests, by the interests of an elite who don’t care that the poor do not have access to anything,” one protester told Ruptly. Others accused Bolsonaro of corruption, saying they were outraged by recent developments involving vaccines.

On Friday, the Supreme Court allowed for an investigation of Bolsonaro, among other senior officials, to be conducted, over alleged irregularities in a Covid-19 vaccine deal. While the authorities have been criticized for the slow vaccine rollout, new evidence emerged suggesting overpricing and corruption related to the purchase of several million doses from India. Bolsonaro and other officials involved in the case deny any wrongdoing, saying the issue was in the hands of the minister of health at the time, who found nothing irregular regarding the contract. It has now been suspended pending the investigation.

Another scandal regarding the Amazon rainforests was also on the protesters’ agenda. Bolsonaro and his government are accused of involvement in illegal deforestation and other destructive activities in the rainforests. The authorities, however, claim they are taking measures to protect the Amazon. Last month, troops were deployed to the rainforests at the order of the president, tasked to combat a surge in illegal logging.

The latest Brazilian protests have spread around the world, as people with anti-Bolsonaro banners also gathered in several European cities, including Vienna, Berlin, Amsterdam, and Paris. ‘Bolsonaro out’ was seen by thousands of spectators during the Tour de France, as it was written in chalk on the path of the cyclists.