Pentagon slammed for turning $1 billion ‘coronavirus fund’ into more military-industrial pork – but what did Congress expect? 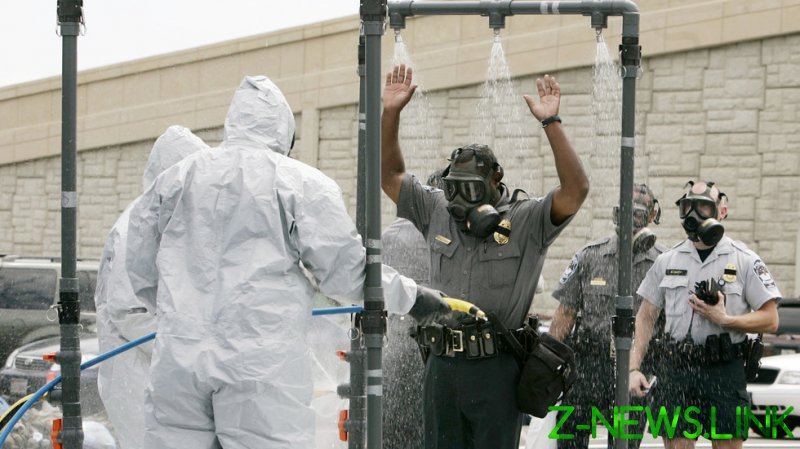 While the Department of Defense received $1 billion in March’s CARES Act stimulus bill specifically to “prevent, prepare for, and respond to coronavirus,” it ultimately diverted most of the windfall to defense contractors, the Washington Post revealed on Tuesday.

The pandemic response fund, created under the aegis of the Defense Production Act, was supposed to be used to produce N95 masks, gloves, and other PPE that was scarce at the time. Instead, it was doled out to mega-corporations like Rolls-Royce, GE Aviation, and ArcelorMittal, as well as to smaller firms making drone technology and a fabric manufacturer whose product is used to make army uniforms. The only thing most recipients had in common was that their work had no immediately apparent connection to coronavirus preparedness.

Department of Defense lawyers justified these acts of creative accounting with the logic that propping up the lucky contractors was an urgent priority to maintain US national security, referencing the fragile military supply chain that has seen single companies monopolize the production of vital proprietary hardware without which the nation’s impressive war machine cannot function. Even as social media pondered whether the report described a case of embezzlement, the Pentagon seemed far from ashamed – it has demanded another $11 billion from any stimulus package that makes it out of Congress.

Worse, at least a third of the Pentagon contractors who benefited from the misappropriated pandemic response funds were essentially double-dipping, WaPo revealed, helping themselves to the critically-underfunded Paycheck Protection Program which so many American small businesses outside the defense sector have struggled to access.

House Democrats had already taken a dim view of what the House Committee on Appropriations called a direct violation of the spirit of the CARES Act back in July – though they stopped short of raising a finger to halt it. “The Committee’s expectation was that the Department would address the need for PPE industrial capacity rather than execute the funding for the [defense industrial base],” they wrote in a hand-wringing evaluation of the appropriations.

House Armed Services Committee Chair Adam Smith (D-Washington) slammed President Donald Trump’s administration for “continu[ing] to exploit the trust of the American people” and spending three times as much on defense contractors as on expanding the country’s pandemic defenses in a Tuesday statement after the Post report emerged. However, he did not confirm any plans to actually pursue an investigation, even while acknowledging that the Pentagon’s latest $5.3 billion funding request also lacked a “properly detailed” spending plan.

Others were less circumspect in the wake of the damning expose. Democratic Reps Mark Pocan (Wisconsin) and Barbara Lee (California) have demanded a formal investigation, challenging the legality of the Pentagon’s actions.

Missouri House candidate Cori Bush was even more direct: “Defund the Pentagon,” she stated on Twitter – an idea that found warm reception among the progressive left.

Democratic Socialist Vermont Senator Bernie Sanders, who had previously proposed that the Pentagon’s budget should be cut by 10 percent, stopped short of saying “I told you so,” though some of his colleagues couldn’t resist.

Meanwhile, plenty of opposition stalwarts have taken the opportunity to grandstand against Trump. While Massachusetts senator and erstwhile political candidate Elizabeth Warren denounced his “bungled pandemic response” in an emailed statement on the WaPo piece and Minnesota Rep. Ilhan Omar observed on Twitter that “their corruption knows no bounds,” Democratic leaders have done nothing to stop the Pentagon from slurping up nearly two-thirds of every discretionary dollar in the US budget. The US spends more on its military than the next 10 countries combined.

Even as some fiscal conservatives have finally come around to the notion, once unthinkable in right-wing circles, that the US spends too much money on its military – and others have pointed out that taxpayer-funded bailouts of private companies are literally corporate socialism – US military dominance remains tied in the minds of Washington’s bipartisan power elite to sheer brute financial force.