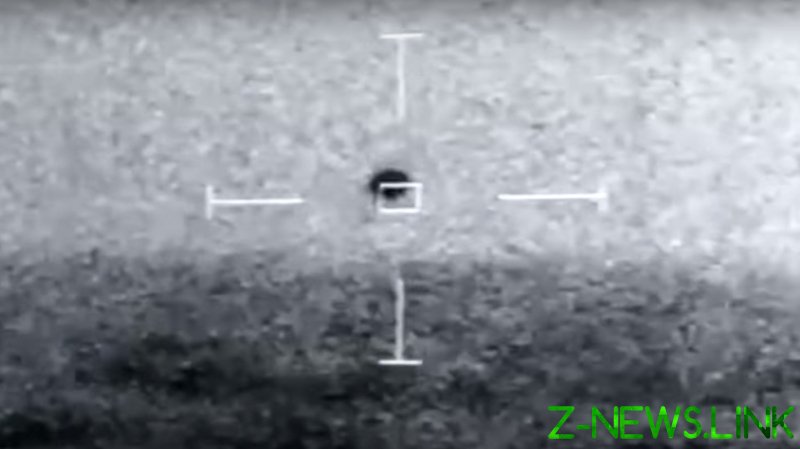 First published on Friday by filmmaker Jeremy Corbell, the grainy infrared footage shows a round object hovering over the ocean before abruptly plunging into the water. Soon after the video began making the rounds, a Pentagon spokesperson confirmed that it was filmed by American sailors.

“I can confirm that the video was taken by Navy personnel, and that the UAPTF included it in their ongoing examinations,” Pentagon spokeswoman Susan Gough told the Debrief in a statement, referring to the Unidentified Aerial Phenomena Task Force, a Naval Intelligence program established to collect reports of mysterious sightings.

In the video, bewildered sailors are heard commenting on the strange sighting, with one saying “Woah, it splashed!” after the object dipped into the ocean, immediately telling another seaman to mark the object’s range and bearing.

While Gough offered no other details on the footage, Corbell – whose documentary films largely focus on UFOs and government disclosure – claims the video was captured near San Diego in 2019 from the command center of the USS Omaha, a littoral combat ship. The filmmaker previously shared what he said were unclassified slides from a military briefing on the same encounter, which said that the object disappeared in the ocean and that “attempts to search the water for wreckage were ineffective.”

The Pentagon has alleged that its UFO-tracking project, the Advanced Aerospace Threat Identification Program, was disbanded, but a Senate report last year acknowledged the same work had continued under a different body. Rebranded as the Unidentified Aerial Phenomenon Task Force, the outfit is meant to compile and standardize sightings of unknown flying objects. It is required to produce a report on its findings, expected to be released in June.