Home / WORLD / Pentagon says 2,300 National Guard troops to stay at Capitol through May 23 as post-riot review calls for increased security

Pentagon says 2,300 National Guard troops to stay at Capitol through May 23 as post-riot review calls for increased security 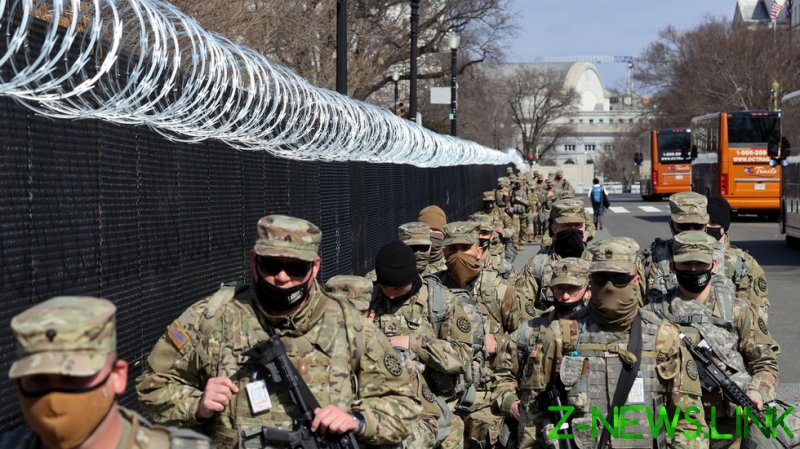 The Pentagon will work to “incrementally reduce” the National Guard “footprint as conditions allow,” spokesman John Kirby told reporters on Tuesday, announcing that 2,300 or so troops have been authorized to stay through May 23.

More than 5,000 Guards were still in Washington as of this week, having been put on alert on March 4 over “online chatter” about another “QAnon uprising” that failed to materialize.

On Monday, a task force appointed by House Speaker Nancy Pelosi (D-California) recommended improvements to Capitol Police staffing, training, planning and equipment, while replacing the current metal fence topped with razor wire with a “mobile fencing option” that could be deployed quickly in case of danger.

If the National Guard is actually withdrawn by the end of May, which is by no means certain, the US Capitol will have been under military protection for more than four months.

More than 20,000 troops were deployed at the US capital after the January 6 riot, when hundreds of supporters of President Donald Trump broke into the Capitol complex and interrupted the joint session of Congress meeting to certify Joe Biden’s election.

Downtown Washington, DC was turned into a Baghdad-style “Green Zone” for Biden’s January 20 inauguration and the subsequent attempt by Democrats to impeach Trump over what they called “insurrection” at the Capitol.

Repeated claims of security threats by militias or conspiracy theorists have been cited by Capitol Police as grounds to keep the troops in Washington. The most recent scare prompted Pelosi to cancel all House business on March 4, but the Senate remained in session. The threat never materialized.

In addition to the new mobile fencing, the team behind the review suggested the Capitol install “a fully integrated” system of surveillance cameras, sensors and alarms, and subject visitors to increased background checks.

The report argued that the Capitol police were severely understaffed at the time of the riot, recommending that 854 new officers should be hired to fill a variety of positions, ranging from regular officers to intelligence specialists and operational planners.