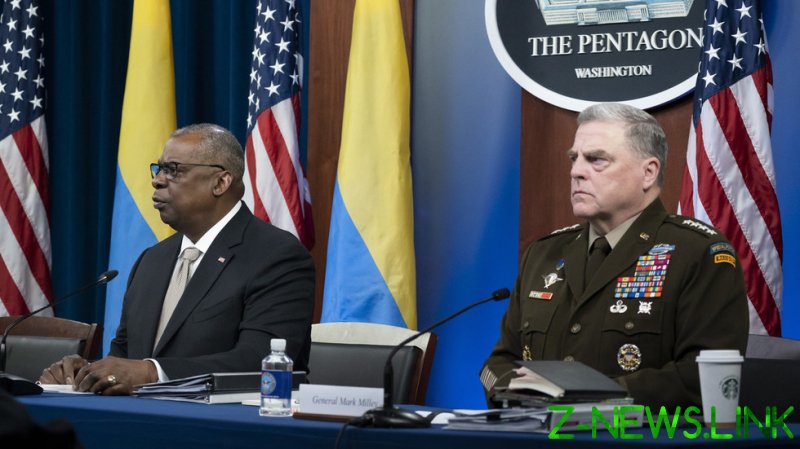 As US Defense Secretary Lloyd Austin and Joint Chiefs of Staff Chairman General Mark Milley met on Monday with allies to drum up new weapons shipments to Kiev, they sat in front of four upside down Ukrainian flags. The snafu wasn’t the first time that top-level politicians in Washington have gotten confused about the country they’re bankrolling.

Austin and Milley hosted a virtual meeting of the Ukraine Defense Contact Group, a panel of 47 states willing to supply Kiev with arms and other military aid. As Austin described American efforts to secure “critically needed artillery systems and ammunition, coastal defense systems, tanks and other armored vehicles” for Kiev, observers soon noticed that something was amiss.

Behind Austin and Milley, four Ukrainian flags had been hung upside down, with yellow on top instead of blue.

Presumably the work of a Pentagon staffer, the gaffe was not the first time that supporters of Ukraine have bungled the display of its distinctive flag. Back in March, the AFL-CIO – America’s largest labor union – tweeted out a picture of its executive council holding upside down Ukrainian flag posters that read “Stand with Ukraine.” After some mockery online, the union reposted the image with the flags digitally altered to face the right way, before deleting it entirely when Twitter users commented on the poor photoshopping job.

Past and present US leaders have also confused Ukraine with other countries entirely. In a speech in March condemning Russia’s offensive on Ukraine, President Joe Biden declared that Russian President Vladmir Putin “may circle Kiev with tanks, but he’ll never gain the hearts and souls of the Iranian people.”

More recently, former President George W. Bush condemned “the wholly unjustified and brutal invasion of Iraq – I mean of Ukraine,” a slip-up that referenced his own invasion of Iraq in 2003.

Following Monday’s meeting, Austin announced that Denmark would provide anti-ship missiles to Ukraine, Czechia would send attack helicopters, and Italy, Greece, Norway, and Poland would donate artillery systems and ammunition. The US has provided nearly $4 billion in military aid to Ukraine since February, and is set to spend another $40 billion on military and economic assistance for Kiev – more than six times Ukraine’s annual defense budget.

The Kremlin has accused the US and its allies of waging a “war by proxy” against Russia by means of these weapons shipments, as well as by training and sharing intelligence with Ukrainian forces.