Pentagon knew about Kabul suicide bombing ‘hours in advance,’ report claims, but troops on the ground say they weren’t protected 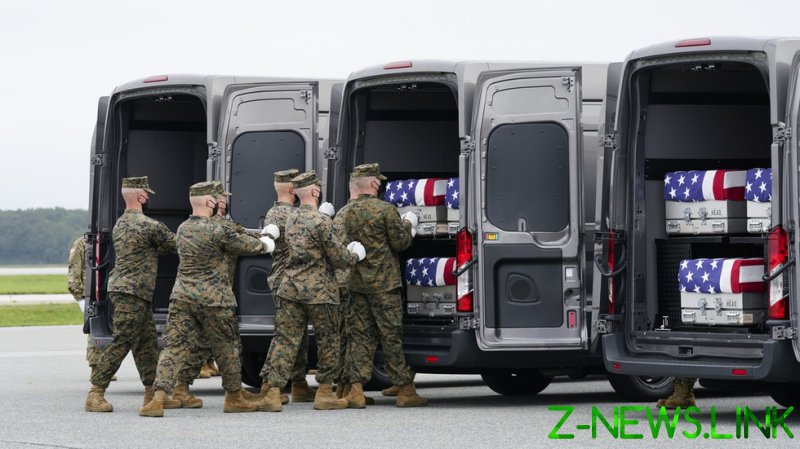 A suicide bombing outside Hamid Karzai International Airport in Kabul last Thursday killed more than 150 people, including 13 American troops. The bombing provoked the US into launching two drone strikes, one targeting an alleged “planner” and “facilitator” with the group responsible, and another supposedly wiping out “multiple” would-be suicide bombers but reportedly annihilating a family and children alongside them.

The initial bombing didn’t take US officials by surprise. The US embassy in Kabul had warned Americans to stay away from the airport due to “security threats” and, in the hours before the suicide attack, Pentagon leaders held a conference call to prepare for an imminent “mass casualty event,” according to a Politico report on Monday.

Milley warned of “significant” intelligence indicating that ISIS-K, a regional offshoot of the Islamic State (IS, formerly ISIS) terror group was plotting a “complex attack,” and the brass in Afghanistan stated that the attack would likely take place at the airport’s Abbey Gate, where droves of Afghans had gathered in the hopes of a spot on an evacuation flight.

The attack was due to take place within the following 24-48 hours, according to notes from the conference call detail.

The White House reportedly left it up to Austin and the generals to prevent this attack as they saw fit. In a separate call afterwards they discussed pressing the Taliban to step up security outside the airport, even while knowing that the militant group couldn’t be relied on, and mulled but ultimately rejected closing the Abbey Gate, as doing so would prevent the ongoing British evacuation operation.

Hours after the second call, the bomber struck, the devastating blast ripping through flesh and bone at the packed gate. Austin and Milley were reportedly at the White House at the time, preparing to brief President Joe Biden on the threat.

While the Politico article details a frantic yet failed attempt to prevent a massacre, accounts from US troops on the ground in Kabul tell a story of negligence.

The Abbey Gate entrance to the airport packed rows of people between two concrete walls, a perfect environment to amplify the destructive power of a suicide bomb. Looking at video footage of the crowds there the day before the blast, Marine Corps veteran and former Trump administration official Adam Korzeniewski asked “why weren’t there defensive emplacements built?”

Multiple troops stationed at the airport messaged a veteran-run Instagram business page, claiming that they had received word of an incoming suicide bomber, but were instructed by superiors to continue “police calling” (picking up trash) regardless.

Thus far, the only member of the military fired over the Afghanistan debacle has been Marine Lt. Col. Stuart Scheller, ironically after he posted a video demanding “accountability” from his superiors.