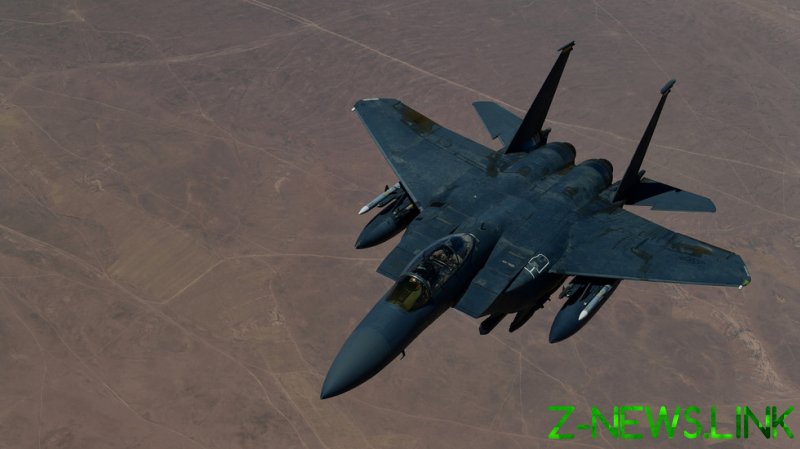 On March 18, 2019, a US F-15E fighter jet dropped a bomb on “a large crowd of women and children huddled against a river bank” near the town of Baghuz and then proceeded to drop several more, killing survivors, according to a New York Times report published on Saturday.

The attack reportedly shocked even US military officers, who watched the incident unfold live through a drone camera and questioned whether it could be considered a war crime. However, the bombing was soon covered up by the military and an investigation never took place, the report claimed.

“At nearly every step, the military made moves that concealed the catastrophic strike,” the report alleged, claiming that “the death toll was downplayed,” reports were “delayed, sanitized and classified,” the blast site was bulldozed, and “top leaders were not notified,” in an effort to keep what happened firmly under wraps.

US Central Command admitted that the strike killed 80 people – of which only 16 were alleged Islamic State (IS, formerly ISIS/ISIL) terrorists – after being approached for comment by the newspaper, and Central Command bizarrely attempted to justify the rest of the deaths by claiming that the women and children could also have been terrorists.

According to the report, after Central Command identified 16 alleged fighters and 4 civilians killed in the strike, it said that it “was not clear” that the 60 other casualties were civilians, “in part because women and children in the Islamic State sometimes took up arms.”

The strike would be one of the Pentagon’s worst civilian casualty events in Syria, if 64 civilian deaths were officially acknowledged, but even the Times admitted that civilian deaths in US strikes are often “undercounted even in classified reports” – hinting that the true number of casualties could be even higher.

With memories still fresh of a US drone strike in Kabul that killed an aid worker and seven children – but not a single ISIS terrorist – also first unveiled by the NYT, the new revelation shocked readers in the US and around the world, who called for action over what many called a war crime.

“How do you even get around a defense like you don’t know for certain that those babies weren’t ISIS fighters?” questioned journalist Caitlin Johnstone, while Center for Civilians in Conflict (CIVIC) director Daniel Mahanty tweeted, “This is nothing short of criminal conspiracy. They bulldozed the strike site and manipulated logs. Who is going to jail for this?”

A former spokesperson for President Barack Obama, Tommy Vietor, called on the Department of Defense to release all information related to the attack, describing it as a “truly horrifying story.”