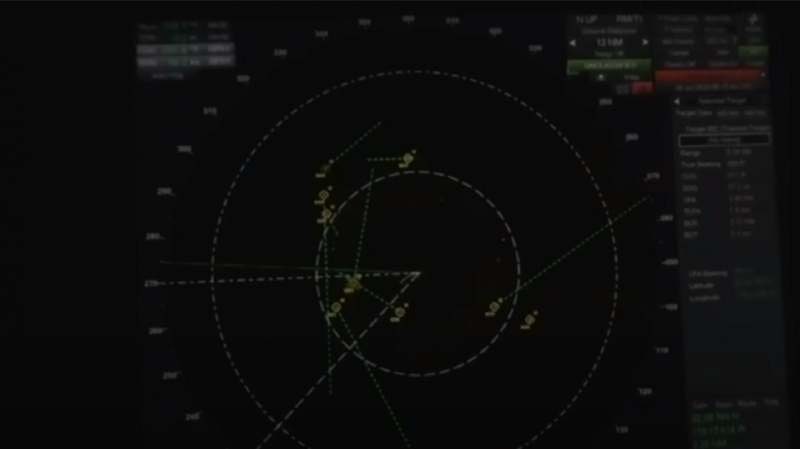 “I can confirm that the video you sent was taken by Navy personnel,” a Pentagon spokesperson told NBC after a video was published by filmmaker Jeremy Corbell. The footage, showing a US Navy ship’s radar screen, shows a total of 14 unidentified objects appearing.

The voices of bewildered sailors can be heard in the background as the crew apparently discusses the strange sighting. Some of them can be heard saying “they’re going fast” as the crew sought to mark the objects’ range and bearing.

The incident has been included in the “ongoing examinations” of the Unidentified Aerial Phenomena Task Force (UAPTF), a Naval Intelligence program established to collect reports of mysterious sightings, the Pentagon official confirmed, while saying that “no further information” about this situation could be released.

Corbell – known for his documentary films largely focused on UFOs and government disclosure – said that the video had been taken in the CIC (Combat Information Center) of the USS Omaha on July 15, 2019 somewhere off the Californian coast near San Diego. He also said that at least one of the observed objects entered water at some point in a development similar to the ones previously reported by the US sailors, who saw UFOs over the sea.

The UFO enthusiast also claimed that a submarine was used to search the area where one of the objects descended into water but no traces of the UFO were found. “The most impressive evidence we witnessed was their endurance. The event lasted over an hour with all contacts just disappearing. We were never able to discern where they departed to,” a crewman at the USS Omaha said, according to Corbell.

The filmmaker also told Daily Star that, according to the data he obtained, the Navy encountered up to 100 UFOs over just one month in 2019. “It was reported to me that there were 50 to 100 unidentified that were swarming many of the ships. Over radio they were talking back and forth and experiencing similar types of contacts,” he said.

It is the second piece of footage Corbell has released over recent weeks. In mid-May, he published another leaked video that the Pentagon has since confirmed as genuine. That video showed a round object darting around over the California coast before abruptly plunging into the water.

The publications come as US intelligence agencies prepare an official report on UFOs. The Intelligence Authorization Act for the Fiscal Year 2021 signed by former president Donald Trump back in December contains a demand for a detailed analysis of UFO data and intelligence collected by the Office of Naval Intelligence, the UAPTF and the FBI.

The report is expected to be presented to the Senate Intelligence Committee in June.