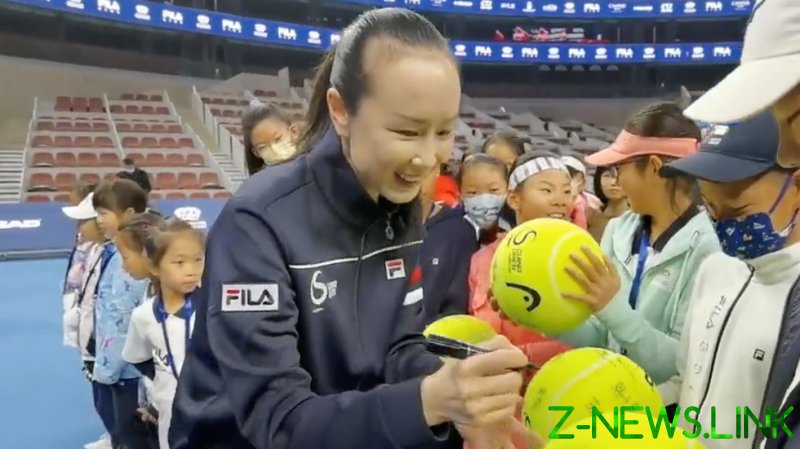 Former world number 14 Peng was again portrayed by Chinese state-affiliated accounts on Sunday, coming after footage of her in a restaurant, in which the date was repeatedly mentioned in an apparent attempt to prove the film was recently shot, emerged on Saturday.

Women’s Tennis Association (WTA) boss Steve Simon said that the clips from the restaurant were “insufficient” evidence to prove Peng’s safety, and many have again been left far from convinced after IOC boss Thomas Bach issued a statement about his chat with the 35-year-old.

“[She] was doing fine, which was our main concern,” Bach said, with images of the purported meeting appearing to show Peng in the same soft toy-filled room from which photos were shown of her on Saturday – images that were again issued by state-linked media.

“At the beginning of the 30-minute call, Peng Shuai thanked the IOC for its concern about her wellbeing.

“She explained that she is safe and well, living at her home in Beijing, but would like to have her privacy respected at this time.

“She prefers to spend her time with friends and family right now. Nevertheless, she will continue to be involved in tennis.”

Bach’s words carry echoes of a widely-derided statement which was supposedly written by Peng and published via state-affiliated media after she initially appeared to vanish from the public eye for three weeks.

The statement effectively told people to question the WTA’s concerns over her welfare and claimed that the troubling allegations she made against Zhang Gaoli, a 75-year-old former member of the Chinese communist party, were untrue.

The lengthy post about Zhang was removed from social network platform Weibo within half an hour of its initial publication.

Simon has insisted that the allegations should be taken seriously, but no mention of them has been made by Peng since her apparent reappearance.

“While it is positive to see her, it remains unclear if she is free and able to make decisions and take actions on her own, without coercion or external interference,” Simon said in response to the restaurant footage.

The WTA has said that its relationship with China – its fastest-growing market – is at a crossroads over the scandal.

World number one Novak Djokovic has backed the potential withdrawal of events from China if the saga is not satisfactorily resolved.