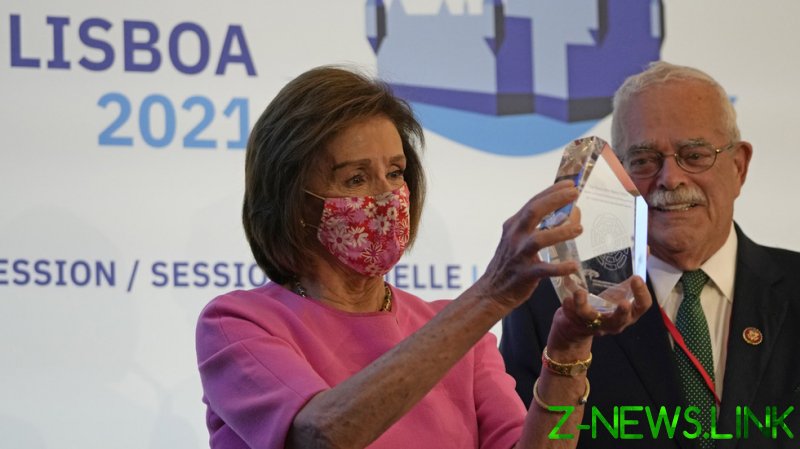 “When people ask me, ‘If you ruled the world, what one thing would you do?’ – I think about that a lot,” Pelosi said, laughing. Though the ten-second video did not show what answer she gave, the transcript of her speech, posted on the official website of the House Speaker, revealed the rest.

“That would be easy. It would be to prioritize the education of women and girls… Because we truly do believe that when women succeed, America succeeds – or any country succeeds.  But globally, we all succeed,” was Pelosi’s answer to her own rhetorical question.

The 81-year-old Democrat from California addressed the 67th annual session of the NATO Parliamentary Assembly, as the leader of the US delegation – and the historic first recipient of the newly inaugurated ‘Women For Peace And Security Award.’

Introduced after the alliance summit in October 2020, the purpose of the prize is officially to honor a woman who has demonstrated “equal participation of women and men in the field of peace and security” or protection of women in conflicts, or “mainstreaming of women’s needs and perspectives” in post-conflict relief and recovery.

Pelosi was chosen for the honor by a jury composed of the NATO PA committee members and the Special Representative for Women, Peace and Security, and received it from the newly elected president of the PA Gerald Connolly, a Virginia congressman and her fellow Democrat.

During the speech, Pelosi argued that NATO is not just a security alliance, but “cohesion built around values.” A peaceful world is “furthered not just by security and fairness in our economies. But it’s also about values and governance,” she said.

She also praised NATO for working to “mainstream a gender perspective into peacekeeping operations and prioritizing greater representation of women at all decision-making levels.”

She also saluted NATO for the “success and cooperation” in Afghanistan, six weeks after the last alliance soldier left Kabul on board a US cargo plane, leaving the country to the Taliban. The NATO-backed Afghan government had collapsed two weeks prior, almost without a fight.

Pelosi flew to Europe last week to attend the G20 Parliamentary Speakers’ summit in Italy, visit the Vatican and meet with Pope Francis, and receive her award in Lisbon.