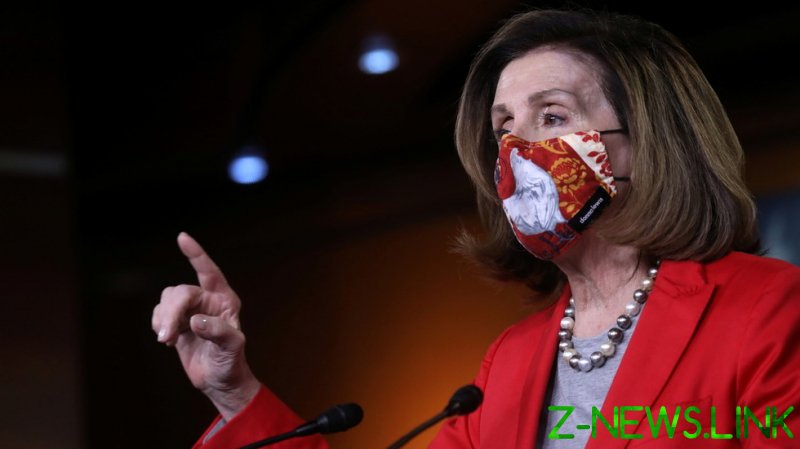 Pelosi accused Senate Majority Leader Mitch McConnell and other Senate Republicans of blocking the House-approved Caring for Americans with Supplemental Help (CASH) Act on Wednesday. Declaring the Republicans to blame for keeping $2,000 individual aid checks out of Americans’ reach, she lamented the GOP’s “endless tolerance for other people’s sadness.”

“It’s amazing to see the patience that some people have with other people’s suffering,” the California Democrat marveled aloud. She talked up the importance of “money in Americans’ pockets” in terms of saving small businesses, which received funding in the mammoth Covid-19 relief bill signed into law by President Donald Trump last weekend even as their customers got a blink-and-it’s-gone $600 check.

However, Pelosi herself was perfectly willing to settle for those $600 checks – at least, until the president made clear he wanted $2,000 payments. Only then did she acknowledge the American people might have been shafted by the gargantuan aid package, which gave out hundreds of millions of dollars in foreign aid while leaving US citizens with crumbs.

Pelosi even admitted earlier this month that she had made a “decision” not to pass a pandemic aid package until after the 2020 elections, correcting a reporter when he framed her foot-dragging as a “mistake.” The speaker made clear she had deliberately stalled negotiations until after president-elect Joe Biden was certified as the winner, even claiming to be “very proud” of the decision to effectively weaponize Americans’ poverty for political gain.

Indeed, many on social media took note of Pelosi’s “hypocrisy.”

McConnell, by comparison, has only dragged the latest legislative drama on for a day – though he has made it clear he’s willing to go head to head with Pelosi in this particular game of “poverty chicken” as he has with the Democrat-controlled House on numerous other issues. On Tuesday, he called for padding the CASH Act with a repeal of Section 230 – stripping Big Tech of liability for user-posted content – and a commission to investigate voter fraud. Both measures are unlikely to receive support from Senate Democrats, effectively killing the bill’s chances of passing.

The Senate majority leader is one of the few sticking points in getting expanded individual aid to American households, as even several Republican senators – including both incumbents from Georgia currently facing a run-off election and deep-pocketed Democratic challengers – have backed the larger checks.

While joblessness is still near all-time highs in the US, unemployment payments have been cut and Americans have not received individual checks since the original CARES Act pandemic aid bill passed in March. Many states are still requiring ‘non-essential’ businesses to be closed and enforcing occupation limits at restaurants and bars – if they are allowed to serve customers at all.