Home / WORLD / ‘Peace would be TERRIBLE for your company’: Code Pink confronts CEO of arms producer General Dynamics over billions in war profits

‘Peace would be TERRIBLE for your company’: Code Pink confronts CEO of arms producer General Dynamics over billions in war profits 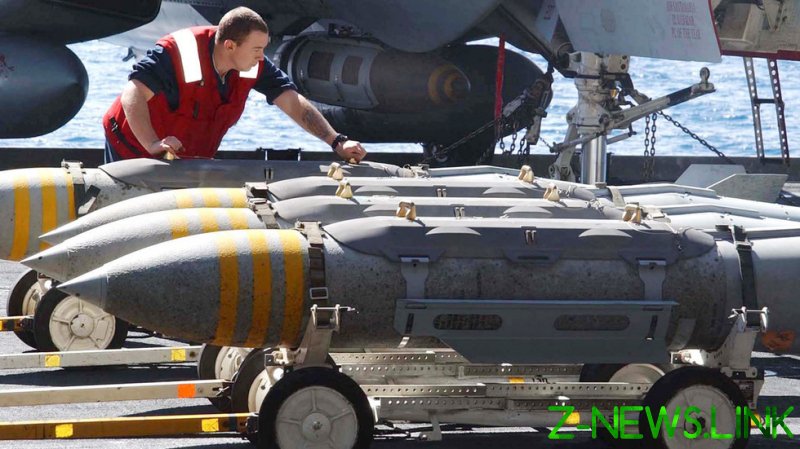 During an annual shareholder conference held earlier this week in Reston, Virginia, Benjamin tore into the firm for its prolific and highly profitable weapons sales to countries around the world, arguing that its bottom line depends on war and bloodshed.

“If you have a model where you need global conflict, where you need wars to be able to make money, I think there’s something fundamentally wrong with this company, and you ought to have more reflection about how you earn your billions of dollars,” she said.

Citing the war in Yemen – where Saudi Arabia has carried out a six-year bombing campaign that’s killed more than 200,000 people from direct and indirect causes – Benjamin noted that munitions produced by none other than General Dynamics had been implicated in the death of civilians in the country, one of the region’s poorest.

“I remember, having been in Yemen in 2016, the 2,000-pound General Dynamics bomb that was dropped on a marketplace and killed 97 people, including over 20 children,” she said, referring to a March 2016 Saudi strike on the village of Mastaba – one among several marketplace strikes reported throughout the war.

I wonder if you think about [the children] as well, because while they are dying, people in this company are making profits off of it.

The scathing critique was soon answered by CEO Phebe Novakovic, who accused Benjamin of passing along “potentially libelous and incorrect information,” though said she would presume her a “person of good faith” who simply spoke from a “lack of knowledge.”

“I think that’s one of the things we should talk about, because the internet is full of misinformation, including the incident you cited at the marketplace,” Novakovic said, adding “I am going to presume that you don’t know the facts, and we are perfectly willing to share them with you.”

The CEO offered no additional ‘facts’ on the marketplace bombing in question, however. The strike was investigated by Human Rights Watch and British journalists in 2016, finding fragments of MK-84 munitions produced by General Dynamics in the rubble. Twenty-five children are believed to have perished in the attack, with the United Nations later revising the total death toll from 97 to 119.

While Novakovic insisted her company makes its “best money” by preparing the US for “deterrence” and that it “works for peace,” Benjamin again raised its sales to Saudi Arabia, asking how that contributed to the national defense. The CEO simply reiterated that the firm’s role is to “support the US military and US national security policy and the preservation of peace and liberty.”

The head-to-head with Novakovic comes as General Dynamics sees a dramatic spike in its stock value, gaining by more than 45% over the last year and hitting a new yearly high this week after rallying for several days. The company’s stock reached its all-time peak in 2018, upon news that former President Donald Trump would withdraw from a major arms control agreement struck with Iran, drastically escalating tensions between the two countries.