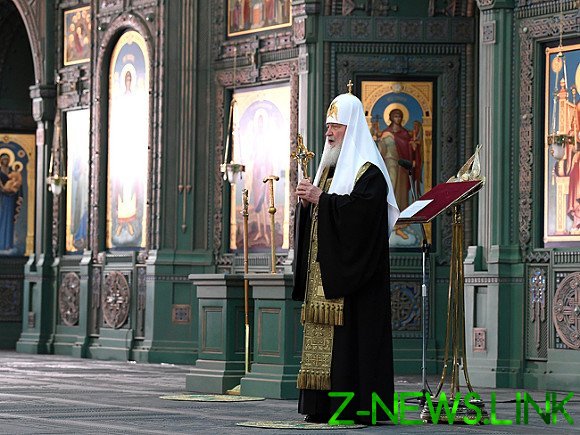 His Holiness the Patriarch of Moscow and All Russia Kirill CONGRATULATED all of us — and his flock, and atheists like me — day 22 of June!

We will be lenient, and he probably misspoke. He didn’t want to offend the veterans, there is an article of the criminal code, he did not want to rehabilitate the Nazism, that too is the article is already more serious. Another would be for it drew, it will not. And well that will not. Too bad that other attract.

But Freud’s book “Psychopathology of everyday life” showed that the unconscious is quite often erupts in reservations, clerical and other small events. The NKVD to such things was more than serious — for a reservation or a typo about comrade Stalin, and other leaders, and could be shot, and to put without question. Missed the letter “R” in Stalingrad, then you don’t love Father of the nation, and if not love, then plots against him. By the way, on the classics, the person does not notice its reservation if it is unconscious, and then often can’t believe I made it. Interestingly, the Patriarch understood what he said?

Straight one clause to do it. I don’t think the Patriarch really thought 22 Jun festive occasion worthy of congratulations. But the General attitude of our elites toward war here, in my opinion, evident.

During the four years of the war were all exploits, cowardice, love, marriage, infidelity, the birth of children. But the main thing — death. Every day thousands and sometimes tens of thousands of deaths. And accompanying death wounds, turning healthy people into disabled — armless, legless, blind. That is, not the life that always continues in any conditions, not even the feats were main — death and suffering. Because a holiday, for it does not come from the current government, was “with tears in his eyes,” because veterans cringe from what later became known as the pobedobesie.

But for our bosses war is different. It is process of transformation of the USSR in the second, and in that in a first world power. This section of the planet, it is our protectorates in Europe. This, then, our confrontation with America in Korea, in Vietnam and everywhere. This puppet “peace movement”, this “socialist choice” in Africa, it is a progressive terrorist group whose leaders have been trained on the Leningrad prospectus. And here is our leadership, I hope not, but really wants to repeat.

If Hitler had not attacked on 22 June, everything would be different, even if in Germany then attacked Stalin. In a defensive war, in the war against the alien invader on our side was an absolute moral rightness, which were perceived and our people, and the world, which then were extrapolated to the actions of the USSR, who had already nothing to to declare during the war of ideals. Aggression, suppression of freedom, territorial gains of the Soviet Union was justified and is still justified by the unconditional moral rightness of our people. For those who are satisfied with that disgusting dance on the bones devalues the Victory Day — the best date of our history — the death and suffering of fellow citizens don’t seem too high a price for Imperial greatness. Yes, they now life is not important, otherwise they would suit the Parade and the vote is not the peak of the pandemic.