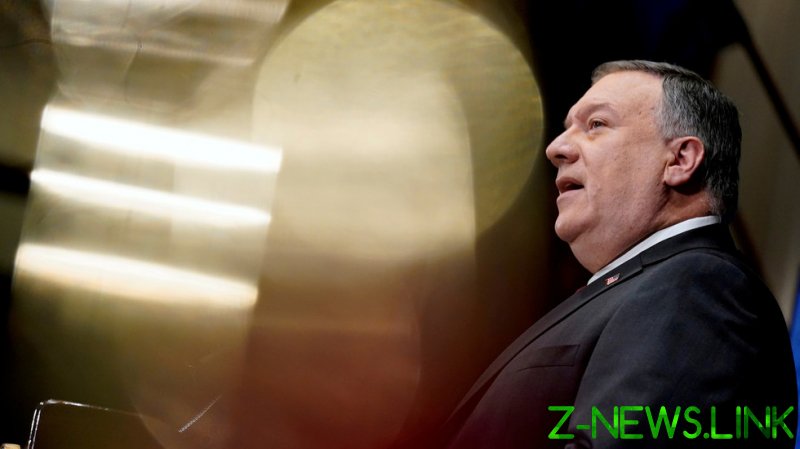 “I wouldn’t have let my 10-year-old son get away from this kind of pathetic blame-shifting,” Pompeo said on Sunday in a Fox News interview. “He should be less focused on trying to blame this on someone else than to solving the problem of making sure that we protect and defend American security.”

The pushback came after Biden said yesterday that he inherited a deal cut by former President Donald Trump’s administration that “left the Taliban in the strongest position militarily since 2001.” He added that Trump drew down the US military presence in Afghanistan to 2,500 troops, leaving him with the choice of following through on the agreement to withdraw or ramp up the force level.

Pompeo defended the agreement negotiated with the Taliban in Doha, noting that there were conditions set and an understanding that the Islamic militants would be crushed if they took such actions as seizing provincial capitals or allowing Americans to be killed from Afghanistan. He pointed out that despite reduced troop levels under Trump, “the Taliban didn’t rise up the way they are now.”

Trump also inherited deals that he considered bad and took action, such as getting out of the Iran nuclear agreement among others, Pompeo said.

Pompeo argued that the Biden administration “just failed in the execution of its own plan,” and by failing to employ a “deterrence” policy, it emboldened the Taliban. Pompeo suggested that the Taliban’s rise may lead to the resurgence of Islamic State (IS, formerly ISIS/ISIL) or Al-Qaeda in Afghanistan, accusing the Democratic administrations of failing to aggressively stand up to American interests.

Pompeo insisted that he and Trump were in charge of the situation, “the Taliban would have understood that there were real costs to pay if there were plots against the United States of America.”

Now that the Taliban has been allowed to recapture much of the country, he said, US forces should use air power to push them back. “They should go crush these Taliban who are surrounding Kabul,” Pompeo said. “We can do it with American air power. We should put pressure on them, we should inflict costs and pain on them. We shouldn’t be begging them to spare the lives of Americans. We should be imposing costs on the Taliban until they allow us to execute our plan in Afghanistan.”

Both Biden and Secretary of State Anthony Blinken made erroneous predictions in the past two months on the ability of Afghan security forces to defend against the Taliban. Biden said in July that there would be no possibility of a scene similar to the 1975 fall of Saigon to North Vietnamese forces, when US embassy staffers had to be plucked from the rooftop by helicopter, and Blinken said on Sunday of the current situation, “This is manifestly not Saigon.”

While pointing finger at the Biden administration, Pompeo also pointed out the general ineptitude of the US military top brass to work out a coherent strategy for Afghanistan.

Pompeo noted that senior US military leaders had 20 years to build up, train and equip Afghan security forces, and their crushing defeat shows that the Pentagon must “fundamentally rethink” its tactics and the way it handed off the battle to its local allies. Afghanistan’s commanding army general, Sami Sadat, said in July that his forces felt abandoned by the US. American forces left the Bagram Airfield, formerly the largest base for the Western war effort, without even notifying the installation’s Afghan commander. Pompeo, however, pinned the blame on the Afghan leadership for failing to execute the US plan for his country.

“And we had a president in Afghanistan who wasn’t prepared to do the right thing for his own national security, for his own country,” Pompeo said