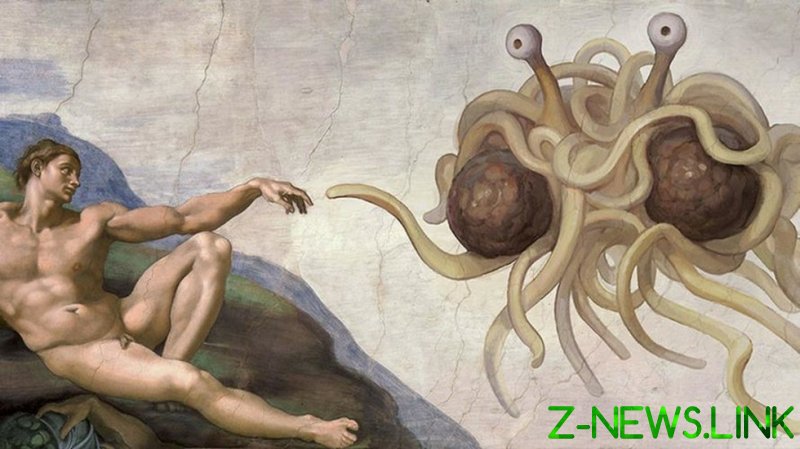 Adelaide resident Tanya Watkins, a high-ranking “Pastafarian,” had made several attempts to secure official status for the church, but to no avail. Apparently tired of having her pasta deity so thoroughly disrespected, she filed an appeal, insisting that the Church of the Flying Spaghetti Monster was incorporated for a “religious, educational, charitable or benevolent purpose,” thus meeting the standards for official recognition stipulated in South Australia’s Associations Incorporation Act.

While making her case, Watkins claimed that the church emphasizes charitable acts, and had previously hosted an event to “feed the hungry.”

The South Australian Civil and Administrative Tribunal (SACAT) was not persuaded, however. The tribunal issued an irreverent, possibly pastaphobic ruling in which it described the religion as a “hoax” and a “sham” unworthy of official status.

“The Pastafarian texts do not represent religious texts and Pastafarianism does not fulfil the objective considerations required to establish a religious purpose under the legislation,” the ruling stated, adding that there was “no evidence of systematic teaching and learning processes.” The tribunal also questioned the claim that Australian Pastafarians were engaged in “broad-based charitable activities.”

The ruling was handed down earlier this year, but only recently published online.

Watkins told the ABC that the decision was “quite disappointing,” noting that formal recognition would allow greater government oversight, making the church’s activities more transparent.

She rejected the notion that the religion was a “hoax” and insisted that there is “a core group of people who really believe in Pastafarianism and that it can change people’s lives for the better.”

Pastafarianism originated in 2005 after an open letter to the Kansas Board of Education jokingly proposed that ‘Flying Spaghetti Monsterism’ be taught alongside creationism in science classes.

Since its inception, the church has experienced varied success in gaining acceptance. It has faced roadblocks while trying to gain official status in Germany, but followers have been able to obtain government IDs wearing their church-mandated colander in several US states, and even Russia. In 2016, the group officiated its first New Zealand wedding ceremony.