Passengers dissatisfied with the behavior of the conductors of “Ukrzaliznytsia” 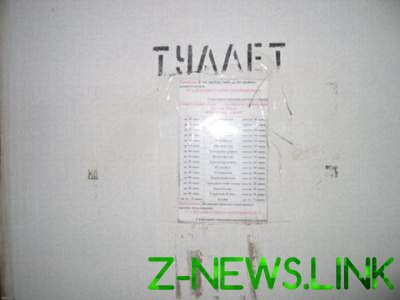 Passengers told of the misunderstanding on the train.

Ukrainians once again complained of “Ukrzaliznitsyu”, describing the conductor of train No. 190 Genichesk – the Dnieper, which in the night would Wake the passengers.

“But the most interesting happens in the morning. The train arrives at the final station early – at 5:41, but that doesn’t stop conductors to Wake up passengers an hour before arrival, when the stars in the sky. Our coupe ignores the call, and after 15 minutes the conductor goes to the “new entry” with a knock at the door of the compartment (thank you though compartment key did not open) and re-targeted appeal: “the Second compartment, Wake up”, – is spoken in the message of “Social control “Ukrzaliznytsya” in Facebook..

Passengers reported the incident to the head of the train. 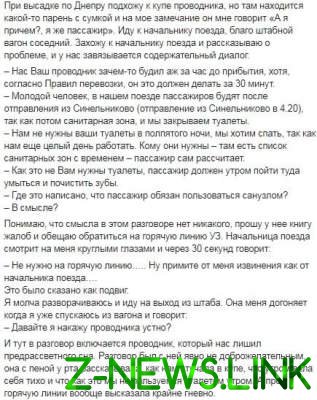 “We are your guide for some reason have woken up already an hour before arrival, although, according to the rules of carriage he should do it in 30 minutes,” they said.

In turn, the head of the train said that this is done so that the passengers had time to go to the toilet to sanitary zones.

At the same time the Ukrainians said that passengers are not required to use the toilet, but who needs it at half past four nights, he would calculate the correct time.

After requests for a book of complaints, the head of the train apologized for the incident, proposing to verbally punish the conductor.

Later in the conversation wedged conductor, which stated that you’ve been very quiet early in the morning.

“You that would be easier if you call this hot line, I think that will change? On the railway for 70 years ruin, and I think your call will change something?

Well, the phrase “the Passenger must in the morning to go to the toilet”, maybe I should add in quotations” – said the travelers.