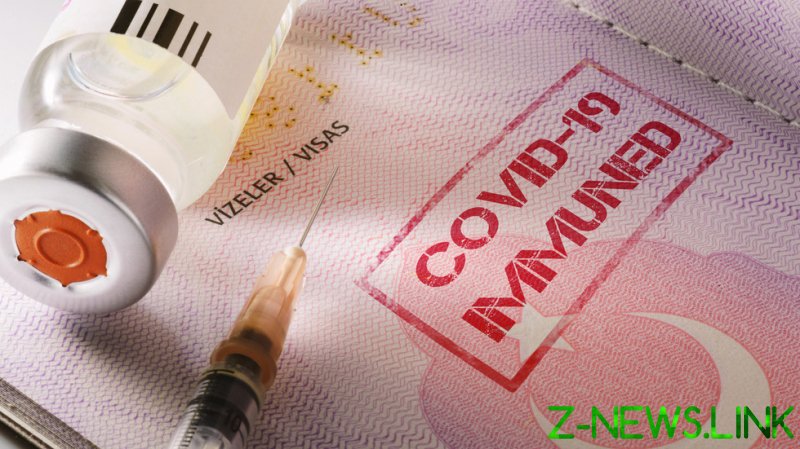 On Wednesday, the European Commission formally presented its plan for a pass that would be common to all member states and allow for a gradual resumption of the ability to travel freely across the bloc.

Since such an initiative was first floated, it was widely dubbed the ‘vaccination passport’ in the media, and triggered a wave of all sorts of concerns. People started drawing parallels to the most obvious example of a ‘health certificate’ being applied nowadays: Israel’s ‘green passport’ program. There, those who got two doses of a Covid-19 jab, or are immune after having been ill, are given privileges in everyday life.

The resemblance became even more pronounced when the EU Commission chief Ursula von der Leyen revealed the bloc’s joint document would be called the ‘Digital Green Pass’ (renamed the ‘Digital Green Certificate’ since then). China also rolled out a similar app for travellers earlier – however, it’s still unclear which countries are ready to recognize it as valid.

Von der Leyen’s announcement, made in the beginning of March, led to a number of media headlines expressing worry about the ‘EU rolling out vaccine passport’. The official proposal, made this Wednesday, is expected to trigger a new wave. While presenting the ‘Green Certificate’, the European Commission’s top figures made it clear that it’s still up to the member states to decide how to use it.

The main driving force behind the idea of travel certificates are the countries whose budgets suffer most from the disruption of their summer holidays. The Spanish press, for example, dubbed Covid-hit 2020 “a black year for tourism,” as the country hosted 77% fewer visitors than in 2019. So it’s no surprise that Spain wants to be the first in the bloc to try the ‘Green Certificate’, and is making every effort to implement it as soon as possible. The Spanish tourism minister even suggested the country would be ready to use the certificate in May, when Madrid hosts the International Tourism Fair.

How that would be possible is yet to be explained. EU officials expect they would need three months of technical work before the certificate is ready. The tourism minister of Greece – another country that witnessed an almost 80% decline in the number of tourists last year – called on EU leaders to “move more quickly” and adopt the pass.

The impatience of the EU’s southern members is understandable, and they are not alone while calling for some sort of ‘normal life’ to be back as soon as possible. “We need freedom of travel back within the European Union,” Austrian Chancellor Sebastian Kurz proclaimed back in February. Chancellor Kurz is advocating for a certificate that would be based on the Israeli experience. Greece and Cyprus have already shown their support for this practice, as they inked a deal with the Jewish state to allow mutual free travel for those vaccinated.

Is it going to be a ‘vaccine pass’?

And here’s where it comes back to the main stumbling block – vaccination. In the words of Belgian foreign minister Sophie Wilmes:

Our fear: vaccination becomes a filter while entering the country. This is wrong. Vaccination is not compulsory in our country.

The concern is shared by Germany and France as well. While supporting the idea of the ‘pass’ in general, Chancellor Angela Merkel pointed out that it would be premature to hand out privileges to those who’ve had the jab, given there are so few in the EU so far. “As long as the number of people vaccinated is so much smaller than the number waiting to be vaccinated, the state should not treat the two groups differently,” she said in an interview. In Germany, some 8% of the population has received the first dose.

Right before Ursula von der Leyen announced the ‘green pass’ project in the beginning of March, France’s President Emmanuel Macron said that the country could develop an internal ‘health certificate’ to allow people into restaurants or cultural venues, and pointed out that he is against the idea of having a document that is “only linked to vaccination.” For the moment, some 8 percent of the French population have received their first vaccine dose.

As revealed on Wednesday, the project attempts to address the ‘vaccine pass’ fears. The planned certificate will include proof of vaccination, and information about the recovery process for people who suffered from the virus. For unvaccinated citizens, it will include their Covid-19 test results.

“It is necessary to prevent discrimination against persons who are not vaccinated,” the explanatory memorandum states. “Therefore, possession of a vaccination certificate… should not be a precondition to exercise free movement rights.”

However, this unbinding formula doesn’t seem to prevent individual EU member states from deciding on their own whether to let unvaccinated people in.

No unity in the Union

You might expect the answer to be given next week, when the EU leaders are scheduled to gather for a summit. Don’t bet too much on their unanimity, though. “Everyone here agrees that we need something like this,” German Сhancellor Angela Merkel said after informal talks back in February. The problem is: not everyone has the same idea of that ‘something’.

“The agreement depends on the position taken by the countries that are against, in principle, having a ‘vaccine passport’,” Simon Clarke, microbiologist from the UK’s Reading University told RT. “But at the end of the day, they’ve got to remember that the countries with large tourism industries could, if they wish, go their own way and refuse to let people in without the immunity passport. So it does place some burden on them, to work with other countries and make sure they are satisfied.”

Should this be where the EU makes a stand to defend its title of ‘Union’? France’s Macron apparently thinks so. He has already called to “prevent each country from developing its own system”. Easier said than done, though. For his part, Austria’s Kurz noticed that without a common solution, the ‘green pass’ would be “approached nationally.”

Kurz has a reason to be skeptical: the previous vital matter that required a joint effort from the bloc – a common vaccination strategy – turned out to be a failure. The mounting claims about chaos in distribution culminated with a call from five EU member states, including Austria, to stage a summit and address the concern that “deliveries of vaccine doses… to individual EU member states are not being implemented on an equal basis.” Amid the shortage of vaccine doses, certain EU members, like Hungary and Slovakia, opted to make their own contracts with Russia and China. For Slovakia, the purchase of Sputnik V caused a high-level political scandal.

The World Health Organization (WHO) is still opposed to the idea of “proof of Covid-19 vaccination for international travel as a condition for departure or entry.”

“At the moment, the World Health Organization did not recommend vaccination passports as elements to give privileges or enable travel,” the organization’s representative in Russia Dr. Melita Vujnovic told RT. “However, good data on vaccination are extremely important, and the countries are encouraged to actually have information systems that enable them to monitor the vaccination.”

More hurdles with no payoff

Those who waited for Wednesday’s announcement to bring clarity about the ‘Green Certificate’ initiative might feel disappointed. According to the European Commissioner for Justice Didier Reynders, the member states are going to be given a ‘tool’. So, apparently, the responsibility for using it lies completely with them.

Will the pass serve only for travel purposes, or will it allow people into cafes, gyms or concerts? It’s up to each country to decide.

Will those vaccinated feel relieved? In the matter of travelling – not at all. The ‘Green Certificate’ will show the type of jab its holder used, and whether it is approved by the European Medicines Agency. Still, there are people in Hungary, for example, who got doses of Russia’s Sputnik V or China’s Sinopharm vaccines, neither of which were approved by the agency (only one of these two drugs has even been submitted for the EMA review). And every individual member state has the right to decide how to treat them.

Will the holders of the pass be freed of tests or quarantines? Not necessarily. The member states can still apply any restrictions they want on the people crossing their borders – they only need to “notify the Commission and all other Member States and explain the reasons for such measures.”

“The countries with large tourism industries are the ones who decide whether people come in, vaccinated or not. The decision lies with them,” Simon Clarke concluded.

Meanwhile, questions keep on mounting. How long will it take to get the certificate? How will the border-checking process be organized? And the most important – but maybe the most disappointing one: How long would it take for the bloc’s leaders to agree on the terms of use of the ‘Green Certificate’?