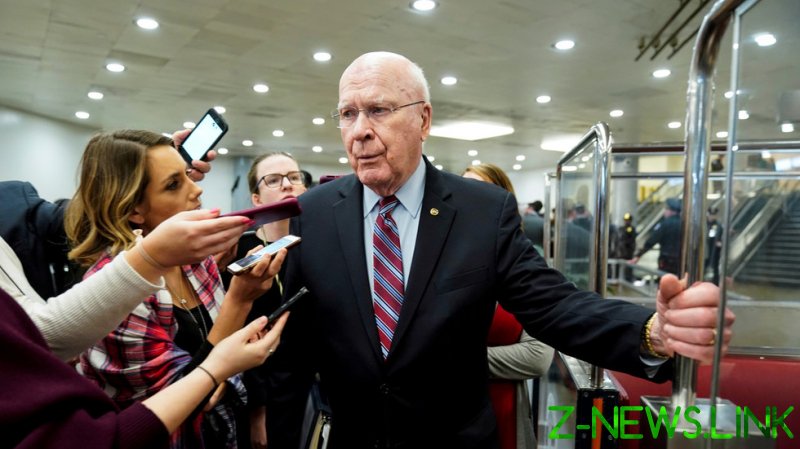 The job fell to Leahy (D-Vermont), president pro tempore of the Senate, on Monday because the US Constitution provides for the chief justice to serve as judge only when a sitting president or vice president is impeached. In fact, the Constitution doesn’t specifically make provision for a former president at all – an omission that critics such as former Representative Bob Barr (R-Georgia) have argued means the Senate has no standing to convict Trump.

Democrats, nevertheless,  plan to move forward with the Senate trial, starting in the second week of February. Unlike Chief Justice Roberts, who presided over Trump’s first impeachment trial a year ago, Leahy will also get to vote on whether to convict Trump.

Conservatives have already cried foul, arguing that Leahy is not fit for the role due his apparent anti-Trump bias. Former Trump adviser Boris Epshteyn referred to the Democratic lawmaker as “a stone-cold partisan,” arguing that “any semblance of fairness or due process” at the impending trial is bound to go “out of the window” if Leahy  is in charge.

Leahy has courted criticism from the anti-Trump crowd as well. “This will be a nightmare for this nation when the Republicans take issue, and they will,” a self-described “Trumpism” opponent said.“This is about us, not you.”

“I think you’re great and I get the logic here but the GOP is looking for any way out of the trial. Let the Chief Justice preside,” another said.

Leahy has bashed Trump on a wide range of issues over the past four years, from banning travelers from seven predominantly Muslim countries to the size of Trump’s inauguration crowd to cutting funding to the World Health Organization. Even after the Mueller probe failed to find evidence that the Trump campaign colluded with Russia to win the 2016 election, Leahy continued to allege nefarious ties between the president and the Kremlin. He called Trump’s acquittal in last year’s Senate impeachment trial “beyond outrageous.”

The senator also has been outspoken on the allegations behind the latest impeachment – that Trump incited an “insurrection” at the US Capitol on January 6. Leahy said earlier this month that Trump is “the greatest threat to the Constitution and to American democracy in a generation.” He added that healing the nation would require first holding Trump accountable for fueling and exploiting a “dark undercurrent of insurrection.”

A judge who had publicly expressed such strong opinions about a defendant might normally be asked to recuse himself from the case in the US court system. Leahy himself blasted Supreme Court Justice Amy Coney Barrett in November for refusing to recuse herself from a case concerning Obamacare because she had criticized the law. And Leahy, who called the Supreme Court hyper-partisan after Barrett’s confirmation, was judged by his colleagues in a 2009 vote to be the most partisan Democrat in the Senate, ranking ahead of even the likes of Chuck Schumer (D-New York) and Dick Durbin (D-Illinois).

In a statement on Monday, Leahy vowed to administer Trump’s trial “with fairness, in accordance with the Constitution and the laws.”