Home / Video news / Participants of the torchlight procession were pelted with fireworks law enforcement near the AP. Video

Participants of the torchlight procession were pelted with fireworks law enforcement near the AP. Video 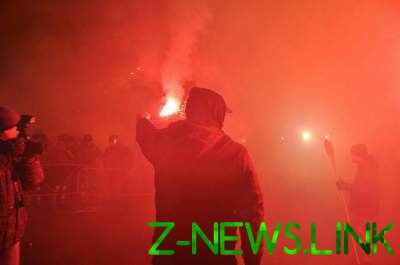 No use of force against protesters is not taken.

Participants of the torchlight procession in honor of the fourth anniversary of the beating of students of Euromaidan were pelted with fireworks cordon of law enforcement officers near the building of the presidential administration in Central Kiev, but conflict did not happen.

Before the March at the monument of Independence held an impromptu rally. Some of the marchers held torches and national flags of Ukraine.

The closer the procession to the building AP the protesters began shouting in the direction of law enforcement, and then began to throw in their fireworks. The police threw fireworks, no use of force against protesters is not taken.