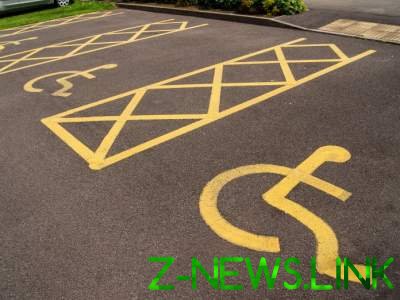 From October 26 came into force the new fines for drivers.

From today entered into force a law giving police the right to fine and even to take tow cars without proper grounds is parked on the ground for persons with disabilities. In a press-service of the patrol police said that the cops are oriented to punish violators. With it, the administrative Protocol may be discharged, even if they agree to remove incorrectly parked car.

“According to information that we provided, the Department adminpraise, the patrol can work in accordance with this law. If the vehicle is in place for people with disabilities and there is no indication that he has a right, citizens can call the patrol. If the driver is in the car, they make the decision. If such a situation develops, the driver in the car and he is ready to move the car, then its ruling in this Park he will still get it. If not, call the tow truck and the car’s been towed. Today the patrol was already focused to deal with such violations”, — said the press service of the patrol police of Ukraine.

Also the police pay attention that we are talking only about Parking, equipped in accordance with the state standards. “The law applies to and Parking near the supermarkets, shopping malls. But there are sometimes portable signs (small, does not meet the standard). The law in such cases does not work. But if there are made — no questions”, — said the press service of the patrol police.

DEVELOP A MECHANISM FOR TRICKY SITUATIONS

It is clear that in the first day of the law, motorists have questions related to the intricacies of its application. For example, what about the driver who brought the person with a disability and waiting for him on spartakovka until he comes back? Or as family members of a disabled person to prove the legality of the use of the labels “Disabled”, if they are also using that car? By the way, the law also says that in addition to the employees of internal Affairs bodies to draw up protocols on adminnarusheniyah (i.e., to prescribe penalties) can also “members of public organizations of persons with disabilities, authorized thereto by the Executive committees”.

What will be the mechanism used to develop and “work” of these protocols and the settlement of the earlier contentious moments, is not clear. “This is a fairly new process, so now the patrol police Department produces a unified position on Parking”, — explained the press service of the patrol police.

According to avtoyuristov until these complete explanations, the drivers (including legal) with a patrol can be disputes and offenders, seizing the moment, and does get away with it.

“The first difficulty is that under the legislation we have no clear definition of who is a “person with disabilities”, what document is confirmed. Speaking generally, Yes, when a driver with a disability, then it must be a about this document (if no obvious signs of disability, as stated in the new law). But if it’s a passenger? If a situation arises that the person is on the sign and said, “and I brought a disabled person. He went there on business”. And that the police will stand to wait? Even if such a person is fined, he will make every document the person with a disability and say, “here I was brought, any questions for me?”, explains avtoyurist Vladimir caravan.

“THE FOUR ASSHOLES AT THE READY EXCUSES”

Reporters learned opinion about this law the paratrooper Sergey Kalityuk, who was injured in 2014 and since then travels in a wheelchair, and in the city (lives in Lviv) moves on the car.

“So you understand, these facilities are busy almost always, and only sometimes! — you get people there. But this usually happens only at night. Some will melt, because you just don’t observe it. They think: “Well, we do people in wheelchairs drive?” But there are particular assholes who know that this is a place for people with disabilities who travel in wheelchairs, but they get it anyway. These three are always ready with excuses: “of Parking there because I was here”, the second “look, the place is full, you could be anywhere”, the third — “why did you not round up, what drove me,” and fourth — “and I’m five minutes only.” Who have a conscience, those without issues move the car, and there are those who tell us to try something”, — says Sergey Kalityuk.

The same explanation we heard today and the head of the portal dtp.kiev.ua Vlad Antonov, while “Parking” the RAID at the airport “Borispol”.

“No, first, does not know about the increase in penalties, and the more people who Park in places for people with disabilities. The reasons that people don’t look where they are parked, and see whether the place. Second, they do not know what those spaces are and how to use them, and thirdly they do not know about the punishment. And this despite the fact that the Parking lots are empty seats. But they are usually far away. People love comfort: if you come by car, walk a hundred meters, they no longer want. And they are parked with all imaginable and unimaginable violations. But if there is to be some work, if the drivers are really fine, then over time the number of people will be less,” said us Vlad Antonov.

See also:  The residents of Kiev complain of a "fake" Valet Parking

WHY IS THIS LAW NECESSARY

In fact, to Park where they are entitled to by law for people with disabilities is crucial.

“First, according to GOST place for people with disabilities has specific dimensions and it is wider than usual seat. Because of this I can fully open the door, roll up or lay out the stroller, and me no one will clamp. Because if my door closer than a meter, I didn’t open the door, I will be even harder to get in the car, and if closer, I just will not come. My stroller has a width of 62 cm, and to pass between the machines you need at least 75 cm and Therefore need this meter. Plus according to the standards such Parking should be located no further than 50 meters from the entrance. Besides, near Parking lots, though not always, there are ramps, beveled curbs,” — says Sergey Kalityuk.

To the word. the law also stipulates that you can be fined for illegally pasted on the car the sign “Disabled”. As for the item, then Sergei says that these are not met. But he came across people with disabilities, but driving with no stickers.

“There are people who have a disability, a disease that labels do not have. There were even people with amputation. But they glue the sticker does not want to be considered normal. Someone shows ID, some not. There is a caveat that compel a person to stick the sticker cannot be, the law does not oblige to this. It is right we have to enter the us standard — have them a person is issued a special badge, which they hung on the rear view mirror. And if the police approaches the car, once this thing sees. This is useful because you can temporarily switch to another car and outweigh badge on it”, — explains Sergey Kalityuk.