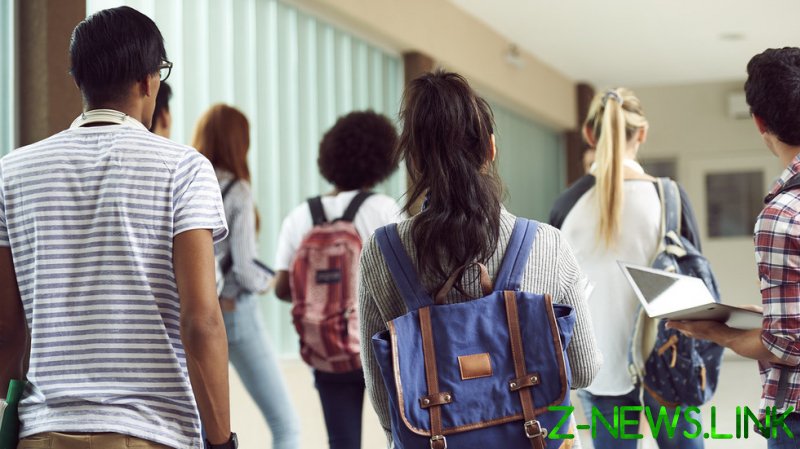 Few expected George Floyd’s killing to lead to a feud over ‘Asian privilege’. But that is the storm that has been waging at America’s top performing public school, Thomas Jefferson High School in Virginia.

The school, often referred to as TJ, offers a college preparatory program emphasizing the sciences, mathematics, and technology to children aged 14 to 18. It is ranked as the No.1 high school in the nation, and due to its status, earning a place there is competitive. Until recently, it used an admissions test to choose pupils.

But that’s now been dropped under pressure from campaigners such as the Black Lives Matter movement, who complain that entrance exams discriminate against African-American children and those from poorer backgrounds. TJ now intends to improve the diversity of its intake by looking at “experience factors,” which include economically disadvantaged students, English language learners, special education students, or students currently attending under-represented middle schools. Some have even pushed for admission to be decided through random lotteries.

The decision has invoked fury on both sides, with parents and campaigners clashing in demonstrations outside the school.

The storm erupted when the ethnic makeup of the latest intake – the class of 2024 – was revealed. It showed that of the successful 486 children – from 2,539 applicants – fewer than 10 were black. (The school hasn’t confirmed publicly what the exact number is, but RT has discovered it is actually just six.)

To some this would be a pleasing picture, showing minorities being granted entry to the country’s top school and an absence of white dominance. But for others, including BLM supporters, it’s evidence of the socio-economic advantage of white and Asian children.

They say rich white and Asian parents prepare their children to get into TJ by enrolling them in unofficial feeder schools, and pay for special tutoring and materials that prepare them for the entrance exam. The school has a reputation for turning out successful students – its alumni is a Who’s Who of academics, scientists, entrepreneurs, and military officers, as well as musical artists such as Dave Grohl of the Foo Fighters.

Virginia has been dubbed“the state for crazy rich Asians,” and research shows Asian households there have a median income of $101,515, while for black families it’s $49,562. The state average is $71,535.

Glenn Miller, whose child is a junior (grade 11) at TJ’s, feels dropping the entrance exam is a mistake, and will lead to a drop in standards and outcomes. Speaking to RT.com this week, he explained: “The goals of society should be equality of opportunity, not equality of outcome.

“There is concern that an anti-intellectual strain has infiltrated the ideology of critical race theory and that groups that have historically performed well academically are its targets.

“The larger point is in the larger historical context we regard what is going on with TJ is emblematic of the struggle between merit and counterforces whose calls for equity and equality, when left unchecked, can lead to anti-intellectualism.”

Miller and other parents have filed a legal challenge to the school’s decision. He also has concerns that mistakes of the past are being repeated, with reference to how Jews used to be discriminated against: “The statistical evidence we have compiled suggests that a number of the approaches being suggested as alternatives to standardized tests, most particularly random lotteries, benefit Caucasians more than any other group.

“But it is certainly not unprecedented for an admissions program to target the academic success of a particular racial group. For example, certain colleges used to cap the number of Jewish students for fear that their numbers would dominate the class.

“We believe that it is important for society that its educational systems be able to identify and nurture its very finest students because those students will ultimately be the future great scientists, financiers, and political leaders. A society that chooses its scientists and leaders based on random chance is bound to decline.”

Dr. Harry Jackson, whose son is one of the few African-Americans at TJ’s, is similarly against the removal of the entrance exam. He told RT.com: “The removal of a race-blind [exam] discriminates not only against Asians, but against all students that can display an aptitude for STEM (Science, Technology, Engineering, Mathematics).

“The admissions officials at TJ intend to racially norm the school, weighing one race above another, in addition to weighing one’s socioeconomic status over another.”

Jackson also has an issue with the school’s non-profit charitable foundation TJ Partnership, which receives donations from the private sector and individuals: “Under the guise of equity, the effort to remove the test, a submission to the soft-bigotry of low expectations that assumes that Blacks and Hispanics cannot pass the test, is really a target hit on the Asian community to obfuscate the fraud, waste, and abuse of the funds collected by the TJ Partnership Fund.”

Thomas Jefferson declined to comment directly to RT, but Lucy Caldwell, the head of news & information at Fairfax County Public Schools, said the old admission process needed improving. “The previous process placed an over reliance on the admissions test,” she said. “The test scores reflect the socioeconomic background of the test-takers far more than the students’ academic potential.”

The issue that is dividing TJ is being mirrored across America, as racial and social justice campaigners turn their sights on the nation’s leading schools, and particularly on those where Asian-American children perform well.

Three elite public schools in Boston have also removed their entrance exams. Again, Asian children are overrepresented – they make up only 9.1 percent of the school district’s pupils, but much larger percentages at Boston Latin School (29.3 percent), Boston Latin Academy (18.8 percent), and the John D. O’Bryant School of Mathematics and Sciences (20.2 percent).

No other ethnic group outperforms its numbers like that, but African-American children are well represented at Boston Latin Academy (21.4 percent) and O’Bryant (32.3 percent) against being 29.3 percent of the district’s student body, while making up only 7.7 percent at Boston Latin School.

Reports suggest that many Asian parents of the children at the three elite schools work in nail salons, restaurants, and hotels.

One parent, Sum Tan, said the Asian community felt that academic performance was a path to a secure and better life: “Admission by zip code is a form of segregation, not unity. It will push us backward, not forward.”

Sharra A. Gaston, a spokesperson for Boston Public Schools, told RT.com: “The impetus of these process changes were due to the pandemic, rising coronavirus rates, and in response to Covid-19 regulations. The pandemic has only exacerbated inequities in our community, particularly for marginalized populations within the City of Boston (including economically disadvantaged, Black, Latinx, English learners).”

In New York, Mayor Bill de Blasio has vowed to enroll more black and Hispanic kids in their elite schools, which was also seen as an veiled attack on Asian children, who make up around 60 percent of the students at the city’s most prestigious high schools.

State assemblyman Ron Kim commented that the “narrative is that it seems to, at best, deny that Asian Americans are people of color too.”

The same debate is also happening on the West Coast, as San Francisco’s Lowell High School has cancelled 2021 entrance exams. It’s another ‘magnet’ school and regarded as the most sought-after high school in the city, and will now be using a raffle system. Following a similar pattern, 59 percent of their student body is Asian and the changes will affect them most.

The idea of removing entrance exams is viewed as a left-wing policy and expectations are that it will proliferate under the leadership of Joe Biden’s Democratic administration. How far that goes is yet to be seen, and once Covid-19 is brought under control, there may be pressure to bring back exams.

Wenyuan Wu, the executive director of Californians for Equal Rights, feels a failure to reintroduce entrance exams would do serious damage.

She told RT.com: “It is a race to the bottom, a politically expedient bandage to masquerade decades of policy failures to improve educational performance in too many underserved communities.

“Removing standardized testing in schools such as the Thomas Jefferson High School for Science and Technology as well as New York City’s specialized high schools is an obvious assault on the merit-based principle, the bedrock principle of educational excellence in these schools and in America in general.

“Phasing out or doing entirely away with empirically proven academic selection will have a disproportionate impact on students of Asian descent as they are balanced out of these schools to help boost artificial levels of optic diversity and proportionality.

“In the meantime, no meaningful attempts or reforms are being done to reduce the persistent achievement gap.

“A better alternative to promote best practices and encourage our students, regardless of their immutable differences, is to strive for academic excellence.”