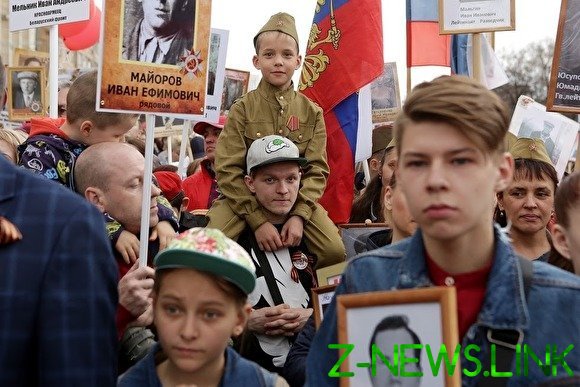 “This day presented to children as a game. And war is bad”

In the last few years in kindergartens and schools in Russia became popular to dress children in uniform by may 9 and make it a photo shoot and performances. Such events are positioned as the education of patriotism. In the pictures happily smiling boys and girls of four to six years in forage caps and greatcoats, often with weapons in hand. The big resonance was caused by history in Pyatigorsk, where the local authorities decided to arrange a “preschool parade troops”, which was attended by more than 500 children in the form of Marines, sailors, artillerymen, and nurses. Most of the parents agrees to participate in such events, but in the meantime this year, more and more moms and dads decide to abandon militarist photos for their children, explaining that war is not a carnival and not a game, and the worst thing that could happen to the country. They meet often lack of understanding from other moms and dads and also educators. Znak.com talked with such parents.

“By may 9, all the kiddies were offered a photo shoot, has posted examples of work and compiled a list. I said I don’t want to photograph the child in this way. Our family against such manifestations. We have no toys no, no tanks, no guns. We are two years explained to my son that this is not good, it’s scary. Now, when we go to the toy store past a tank, the child believes that this exhibit in the Museum. Several times we went to the Museum of military equipment in Verkhnyaya Pyshma, so he perceives it,” said Natalia.

She says to abandon the photo shoot and decided some other parents from their school.

“It so happened that we have a group where parents are indifferent to many things. But we don’t like this day presented to children as a holiday, as a game. We were not forced to participate in a photo shoot, but the teacher really couldn’t understand”, — says Natalya.

But so quiet on the rejection of the militaristic symbolism in the garden do not always react. How wrote on his page on Facebook Chelyabinsk activist Valery Prihodkin, parents of children from the group, which goes by her grandson, decided to buy the guys the caps to the Victory Day. When she “protested such carnival”, it was excluded from the parent chat.

“I’m against the existence of the army, I was against the policy of our government — the click of teeth and sabre-rattling, seizure of foreign territories and wars in various parts of the world! I am opposed to killed someone’s children — whether in the form or they are without form. Chat me back — was indignant after one of the fathers, supporting me,” she said Znak.com.

Sometimes parents decide to abandon the militaristic photo shoots collectively. Yekaterinburg resident Anna Mirko said that this was the case in the group that goes to her son, although February 23, the child participated in a photo shoot with a toy gun to the Day of defender of the Fatherland.

“Our group refused to shoot to 9 may. Now may 9 is celebrated very lavishly and elegantly, and children have formed a very correct image of war, because they don’t understand that every medal on the chest of the veteran received for the sweat and blood, pain and loss. The weapon was a means of survival. And put the baby in the photo in another form, with toy orders and a plastic gun, in my opinion, the same as take a picture of it with another family — this photo is neither history nor memories,” says Anna.

Several parents from Ekaterinburg on condition of anonymity, also said that forbidden to dress their children in uniform for the celebrations dedicated to the Victory Day.

Great success in this direction has reached Moscow the lawyer of the Fund of struggle against corruption Love Sable — it has made the children in the group, goes to her daughter, not dressed in uniform. “I put the question in a parent chat that this disorder. I said that this is wrong because we teach our children not to quarrel, resolve all conflicts in the world, and then for the holidays they are distributing the guns in their hands, put on the caps. Educators must teach our children peace, human values, concern for others, love for nature and this world. Why would they since the childhood to instill the images of war and militarism?” said Sable Znak.com.

Not suggest dressing them in military uniforms and psychologists. The father of three children from Yekaterinburg, candidate of psychological Sciences Sergey Vaysman says that the child perceives the form “as a carnival costume that has nothing to do with the memory of Victory.”

“The main idea of those who are satisfied with these photo shoots, children wearing uniforms is a tribute to a generation that achieved victory. They say that the memory needs to be immortalized, children, grandchildren, great-grandchildren don’t have to forget about it. In fact, such a photo-shoot completely discrediting this idea. When a grown man wears a uniform, he can associate themselves with the events that were to memory. When a child does he get this role. The children, from the point of view of psychology, the main function of thinking — gaming activities, so it turns out that for children it is a game of war. Child form is the militarization of consciousness that promotes war, said that war is tough,” says Wiseman.

According to him, start talking with your child about death from the age of four, since four to six years, the child forms an idea about it, and the war — “this is nothing like death.” “The children understand the problems of adults can’t, they are not interested. Therefore, in the context of the war is to tell them about the suffering of children, like ten years standing at the machines that were the children of partisans, it is necessary to describe. As children suffer, talk about pain, that war is terrible, but then say that came good adults who ceased to torment children,” suggests Wiseman.

In the public field the debate around whether dressing them in military uniforms, in late April raised psychologist Elena Kuznetsova. On his page on Facebook she wrote that it is “clothes of death”, and children “need to buy clothes about life, not about death.” The post sparked heated debate, beneath have left 156 reviews and were liked by more than 17 thousand people.