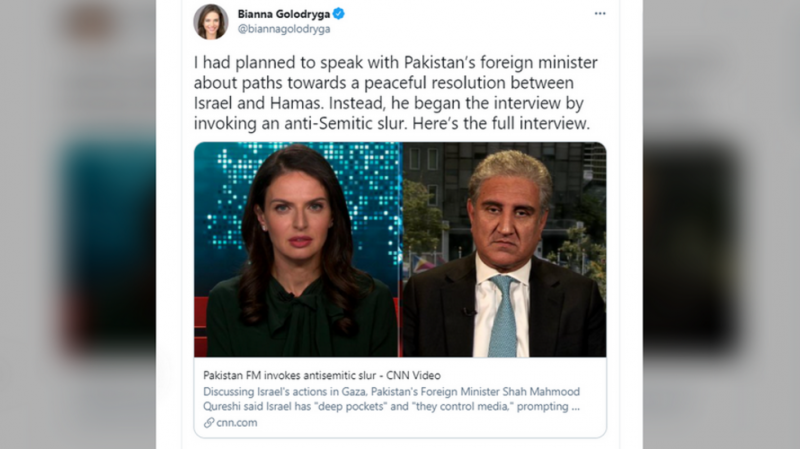 The interview began with Qureshi talking about a possible ceasefire between the Palestinian militant group Hamas and Israel. “Israel is losing out. They’re losing the media war despite their connections,” the minister said.

Journalist Brianna Golodryga quickly asked, “What are their connections?”

“What does that mean?” Golodryga asked.

The journalist responded by saying that she “would call that an anti-Semitic remark.”

The Pakistani FM doubled down, claiming that Israel has “a lot of influence and they get a lot of coverage.” He added that citizen journalism has “woken up people,” and mentioned protests in support of Palestine in countries all over the globe.

Qureshi condemned the loss of innocent lives on both sides of the conflict, as Israel has been bombing targets in Gaza in response to a barrage of rockets launched by Hamas and other militants from Gaza towards Israeli cities.

When asked about the display of anti-Semitism at pro-Palestinian rallies and the role of Hamas in starting the violence, the FM argued that “an extremist element takes advantage of the situation” when there are no talks and the Israeli occupation of Palestinian lands continues.

Golodryga pressed Qureshi again, accusing him of invoking “an anti-Semitic trope” earlier in the interview by claiming that Israel has great influence over the media.

“No, no. What I’m saying is, the perception – look at the perception the world has. You cannot ignore that, ma’am,” Qureshi said, to which Golodryga responded, “But that’s a wrong perception.”

“Could be wrong. But that’s the perception. Negate it by giving a balanced coverage,” Qureshi said.

The CNN journalist argued that it was up to high-ranking officials like Qureshi “to say that that’s wrong.”

“What we are saying – what is wrong is wrong, and I’m not shying away from that,” he replied, saying that countries must promote peace and dialogue to end the conflict between Israelis and Palestinians.

In its report about the interview, CNN again accused Qureshi of using an “anti-Semitic slur.”

Some, including, Pakistani-born journalist and talk show host Fereeha Idrees, defended Qureshi. “He didn’t even utter the word ‘Jew’ or even made a feeble reference to it. All he said was media is controlled by Israel,” Idrees wrote on Twitter.

Idrees pointed out that during the recent flare-up Israeli jets had levelled a high-rise building in Gaza that housed the offices of several media outlets, including AP and Al Jazeera. The Israel Defense Forces (IDF) warned reporters ahead of the incoming airstrike, giving them enough time to evacuate. The IDF said the building was targeted because it contained Hamas military assets.

Michael Dickson, who leads StandWithUs, a group that fights anti-Semitism, thanked Golodryga for “pushing back” against Qureshi’s remarks. “You made unacceptable slurs into a teachable moment,” he said.

Journalist and talk show host Mehdi Hasan, a big critic of Israel’s government, also thought Qureshi was wrong. “If you are accusing Israelis of having ‘deep pockets’ and ‘controlling’ the media, then yeah, you’re invoking some pretty anti-Semitic slurs. Sorry,” he tweeted.

During the 11 days of cross-border attacks between Hamas and Israel 232 people were killed in Gaza and 12 in Israel. An Egyptian-brokered ceasefire came into effect early on Friday.