Home / WORLD / Overdoses soar by nearly 30 PERCENT in US, breaking record for second year in a row – CDC

Overdoses soar by nearly 30 PERCENT in US, breaking record for second year in a row – CDC 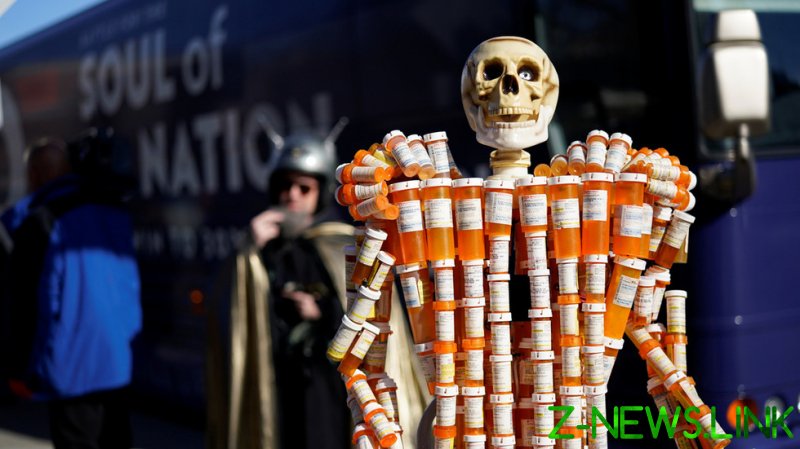 Some 96,779 Americans died of drug overdoses over the last 12-month period counted by the Centers for Disease Control and Prevention, a report released by the agency this month has revealed. The record-setting number of deaths surpasses what were already record-setting figures from the year before as the nation’s drug crisis shows no signs of slowing down.

The sky-high figure represents an uptick of 30.8% from last year’s numbers, and the CDC’s report repeatedly stresses that its numbers are “underreported due to incomplete data” – meaning the final figures could be significantly more, especially with so many healthcare resources still dedicated to the Covid-19 outbreak. The state that experienced the worst spike in drug deaths was Vermont, where casualties surged a whopping 85.1%. Just three states – South Dakota, New Hampshire, and New Jersey – reported decreases in overdose deaths, and South Dakota by far showed the most improvement with a 16.3% drop.

Despite a handful of bright spots in the dreary stats, overdose deaths have reportedly surpassed deaths from guns and car crashes for years. Some analysts have linked the rise in overdose deaths to the Covid-19 pandemic, which has kept needy addicts away from therapy and distant families from seeing each other. Worse than the crippling loneliness many have felt at prolonged lockdowns, the accompanying financial tsunami has forced comfortably middle class families into breadlines across the nation. Self-reported rates of anxiety alone nearly quadrupled between January 2019 and 2021, clocking in at 41%, and with 48.6% of US residents consuming at least one prescription drug in the last 30 days, it’s clear that the tendency to self-medicate is almost as American as apple pie.

Even as attempts are made to rein in bad actors like the Sackler family, whose Purdue Pharma unleashed the opioid epidemic more than two decades ago, have had limited use. Many of the hundreds of thousands of people who became addicted to painkillers when they were being handed out for wholly inappropriate conditions have ‘graduated’ to heroin and other stronger drugs, including the deadly synthetic fentanyl.