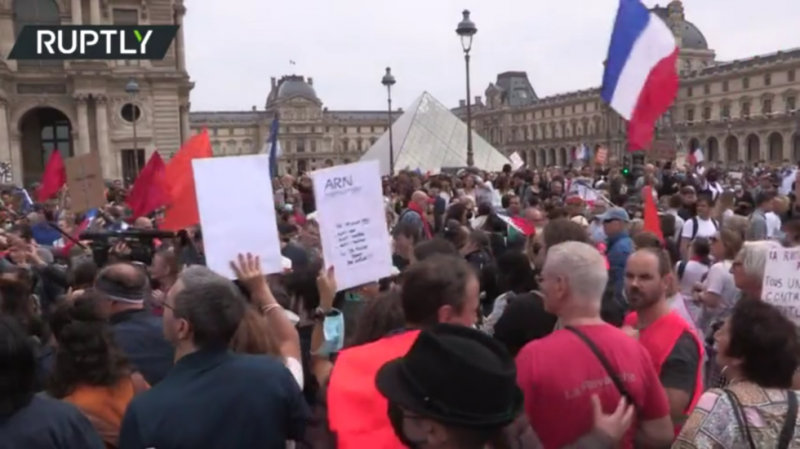 Thousands-strong protests took place in major French cities on Saturday, with a total of 137 protest events reported by the Interior Ministry. The biggest march in Paris drew about 18,000 people. The activists were chanting “Liberty!” and carrying signs protesting the policies of President Emmanuel Macron and demanding his resignation.

The eruption of public anger came in response to the measures that Macron’s government is taking to rein in the Covid-19 epidemic. On Monday, it was announced that health workers will have to be vaccinated by mid-September or lose their jobs. In August, France is to make Covid-19 passports required to visit public spaces like restaurants. The paper certifies that a person has been vaccinated, has recently recovered from the disease, or has a fresh negative test.

The protesters see such health policies as unacceptable coercion, discrimination against vaccine sceptics, and a slide towards tyranny on the part of the government. Smaller rallies against the proposed measures happened in France throughout the week.

Unlike some previous events, Saturday’s rallies were mostly peaceful, barring a few minor incidents. The police reportedly deployed tear gas in Dijon and Nantes and made several arrests in Lyon.

Political forces are capitalizing on the public dissent over Covid-19. The rally in the capital was attended by right-wing politicians Florian Philippot and Nicolas Dupont-Aignan.

Philippot, formerly the vice president of the National Front, announced his candidacy for next year’s presidential election this week. During the rally, he introduced a man who appeared to tear his vaccination certificate into pieces in a gesture of protest.

There was also some intersection between Covid-19 protesters and the anti-government Yellow Vests movement, which joined the marches. Yellow Vests have staged regular mass protests against Macron for over two years since 2018, opposing the president’s economic austerity drive.

France has vaccinated around half of its population, with 55.5% having received at least one dose. But health officials have recently reported a surge of daily infections to roughly a quarter of the mid-April peak level seen during the second wave. The government is concerned that the trend will continue.

“The Delta variant is here, we must not hide the truth, it is more contagious than the previous ones. We must adapt and face it,” Prime Minister Jean Castex said on Saturday.