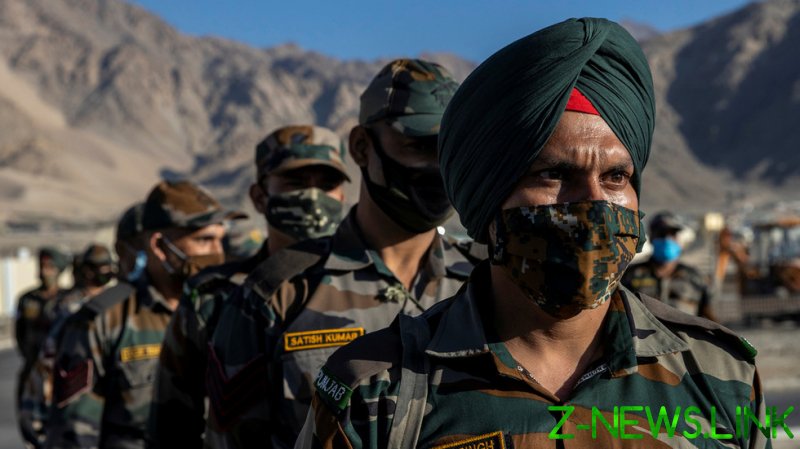 The vaccination of troops continues and the proportion who have received two shots will soon reach 95%, General Manoj Mukund Naravane said in an interview with India Today on Wednesday.

India’s military is ready to extend all possible assistance to the civilian population in tackling the spread of the coronavirus, Naravane added. “We are an army of the people, for the people.”

“There is no difference in mobilizing for the pandemic. This is because [from] time to time we also assist in dealing with other natural calamities,” Naravane said, adding that the military was “quite well geared up” with all of its branches working in close cooperation.

The epidemiological situation has taken a sharp turn for the worse in India in recent weeks amid the emergence of a local, likely more transmissible, variant of Covid-19. On Tuesday, the country recorded 4,529 virus-linked deaths – the highest single-day tally in any country. With over 25.8 million confirmed cases, India is now second in the world in the number of infections, only trailing the US, where 33.8 million have been diagnosed with the coronavirus so far.

But unlike the rest of the country, the Indian military has been going through the second wave of the pandemic with minimal losses, an unnamed high-ranking officer told The Times of India newspaper on Thursday. “We have had fewer positive cases this year as compared to last year,” he said.

The army, Indian Air Force and navy have together registered some 52,000 infections and 140 deaths so far in 2021, according to the source. The vast majority of those cases were mild, while the service personnel who eventually succumbed to the virus allegedly already had other serious health problems, such as cancer or diabetes.

There are currently 5,300 active cases in the Indian military, the officer revealed. The relatively limited outbreak among India’s military personnel has been attributed to the large-scale vaccination of troops, strict health protocols, and service members being stationed away from civilians.

Earlier this week, Russia’s Defense Ministry said that more than 850,000 people in the Russian military – both service personnel and family members – have voluntarily been vaccinated with at least one dose of the country’s Sputnik V jab.

Meanwhile, in the US military, more than 723,000 soldiers have been fully vaccinated against Covid-19 as of Wednesday, according to Department of Defense data.

The Pentagon has launched a campaign to promote immunization among its troops, but the number of those refusing to get the shots remains quite high. The official rejection rate is said to be at around 33%, but a CNN report earlier this year suggested that the actual figure could reach up to 50%.