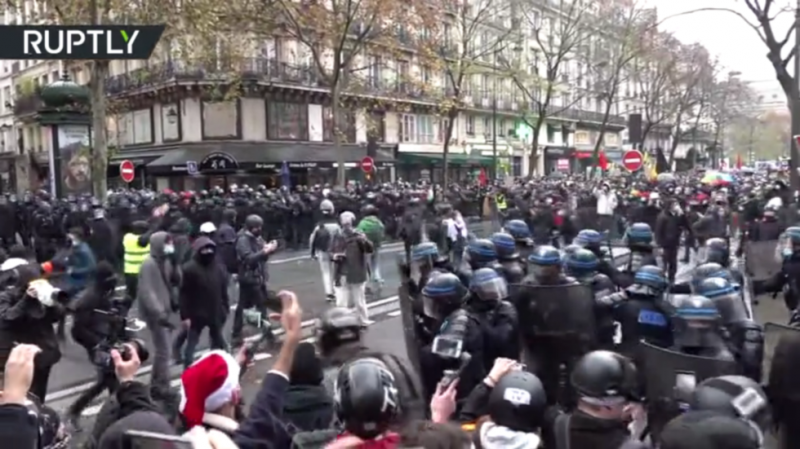 A packed crowd of people set out from the Place du Châtelet right in the city center, just across the river from the iconic Ile de la Cite, heading towards Place de la Republique in the north east. Hundreds of people joined the march, according to the media. The demonstrators were carrying a large banner that read: “stop freedom-killing laws, stop Islamophobia.”

Large police forces were deployed to the area, as previous, similar rallies in the French capital ended up in riots and violent outbreaks. The police made 24 arrests ahead of the protest, the French Interior Minister Gerald Darmanin, confirmed.

Officers also seized some sharp tools, including screwdrivers and wrenches, from participants who they called “thugs” seeking to infiltrate the protest. Still, tensions quickly rose right after the start of the protest as the police repeatedly sought to disperse the crowd to make arrests and prevent those they called “black-clad rioters” from forming any “groups.”

Videos posted on social media show that such heated exchanges led to standoffs and even violent clashes between law enforcement and demonstrators on several occasions. At some point, protesters also set a scooter on fire and left it in the middle of a street.

The officers were seen beating some demonstrators with batons. One activist beating a drum was seen visibly injured in the head in one such incident.

Closer to the destination, police had to use tear gas and water cannon to disperse the crowd. The protesters occupied Place de la Republique and were burning flares and smoke pellets and refusing to leave.

By the end of the march, the police had arrested 81 people, Darmanin said, thanking police officers for confronting some “ultra-violent” individuals. The French media reported, citing Interior Ministry sources, that the number of arrests in Paris had surpassed 100.

Paris was not the only city to witness demonstrations on Saturday; rallies were organized in most of France’s large cities, including Lille, Lyon, Bordeaux, Marseille, Toulouse and Strasbourg. However, most of these were peaceful and passed off without any incidents.

France has seen a wave of protests after President Emmanuel Macron’s government introduced a draft bill that would provide law enforcement with additional surveillance tools. The bill’s controversial Article 24, in particular, sparked public anger: it seeks to protect police officers from doxing and harassment, and bans the filming of on-duty cops and sharing their images online with the “intent to harm.”

The government vowed to “rewrite” the controversial article but the protesters still believe that is not enough.