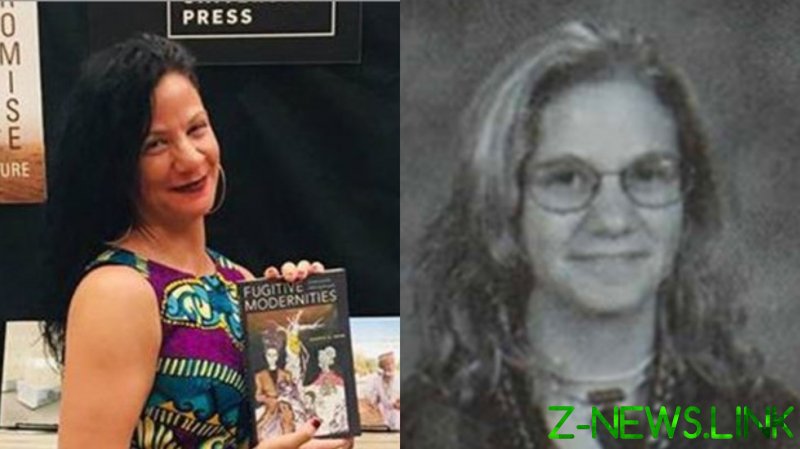 “The discipline of history is concerned with truth telling about the past,” members of GWU’s history faculty said Friday in a joint statement. “With her conduct, Dr. Krug has raised questions about the veracity of her own research and teaching.” The statement called for Krug to resign from her position as an associate professor or to be stripped of her tenure and fired if she refuses.

The response followed a statement by GWU saying that Krug won’t be teaching her classes in the current semester amid a university review of the situation. The university could be hard-pressed to fire Krug because her position is tenured.

“They can’t just fire her,” Mia Bloom, a Georgia State University professor and terrorism analyst, said on Twitter. “She has tenure and lying about being a different race doesn’t qualify for one of the conditions in which you can lose tenure.”

If GWU were to terminate Krug’s position on that basis, or to accuse her of moral turpitude, the administration would put itself in the awkward position of essentially saying that being black was one of the qualifications for Krug’s job.

Massachusetts lawyer Omar Ghaffar tweeted that he’s glad to see such a conflict play out because it exposes a problem with tenured academia: “It speaks to the failure to vet and to a great prejudice against students who disagree with such militant views. We need to disinfect the academic system by outing more people like this.”

Krug, who also worked as an “Afro-Latina” activist in New York City under the alias Jess La Bombera, shocked her colleagues when she revealed Thursday in a Medium.com post that she had posed for almost her entire adult life as a black person. She said she is, in fact, white and Jewish and grew up in suburban Kansas City. She used various black identities, including North African and African American, before settling on “Caribbean-rooted Bronx blackness.”

“I have built only this life, a life within which I have operated with a radical sense of ethics, of right and wrong, and with rage, rooted in black power, an ideology which every person should support, but to which I have no possible claim as my own,” Krug said.

She said she suffered abuse as a child and assumed a false identity as a “teenager fleeing trauma.” Her use of a fake ethnicity apparently wasn’t motivated, at least initially, by trying to get ahead in academia – as US Senator Elizabeth Warren did when she claimed to be Native American and was touted as the first “woman of color” to become a tenured law professor at Harvard University.

But Krug’s false identity may have helped in gaining financial support for her research and writings from such institutions as the National Endowment for the Humanities, the US Department of Education and the Schoumburg Center for Research in Black Culture. She acknowledged funding from those and other institutions in her 2018 book on the Angolan slave trade, called “Fugitive Modernities.”

She embellished her false identify with false ancestors, writing in her book that it was a “love letter” to her grandparents and relatives, including “those whose names I cannot say for their own safety, whether in my barrio, in Angola, or in Brazil.”

Under the Bombera alias, Krug spoke with a thick accent and profanity as she testified before the New York City Council in June. She complained that white New Yorkers waited for hours for their turn to speak and did not yield their time to “black and brown indigenous New Yorkers.”

Author Casey Gane-McCalla said Bombera questioned his blackness in Facebook arguments, such as a debate over whether Bob Dylan deserved his 2016 Pulitzer Prize. Gane-McCalla said Bombera told him he wasn’t a “real revolutionary person of color” if he respected “an old, irrelevant white man like Bob Dylan.” He added, “She went on to try to out-black me by telling me how many Black Lives Matter protests she had attended.”

Some Twitter users suggested that Krug should be fired, regardless of her tenure status, but another suggested a different punishment: forcing her to teach her classes and forever have to explain herself. “Don’t just let her go away,” the netizen tweeted. “That’s the easy way out.”