Home / WORLD / Outrage as NY Democrats refuse to pursue Cuomo impeachment, say constitution does not allow for it after his resignation

Outrage as NY Democrats refuse to pursue Cuomo impeachment, say constitution does not allow for it after his resignation 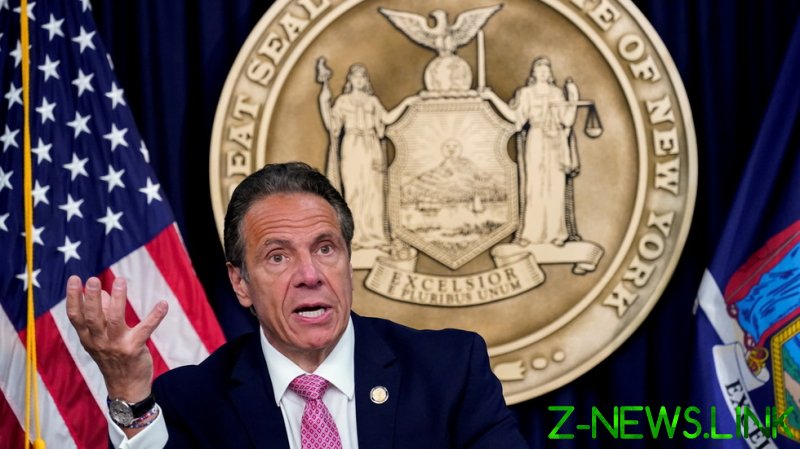 The state’s Assembly Speaker Carl Heastie (D) announced the move on Friday, noting that all impeachment proceedings against Cuomo would be dropped after the governor said he would step down earlier this week, in the wake of sexual harassment allegations.

“After consulting with [Judiciary Committee Chairman Charles Lavine] and my majority colleagues, the assembly will suspend its impeachment investigation upon the governor’s resignation taking effect on August 25,” Heastie said in a statement.

While Heastie said the Judiciary Committee was unable to “complete” its work, he argued that it uncovered “credible evidence” in relation to the sexual assault claims leading to Cuomo’s resignation, as well as the governor’s alleged “misuse of state resources” and “misleading disclosure” regarding the state’s nursing home deaths amid the Covid-19 pandemic.

“This evidence – we believe – could likely have resulted in articles of impeachment had he not resigned,” the speaker continued, adding that he directed Lavine to turn over all relevant materials to other bodies investigating the governor’s use of public resources and his administration’s Covid-19 response.

More than two-thirds of the state Judiciary Committee urged the body to release a public report on its findings, but Heastie argued that could interfere with other ongoing probes, according to Associated Press reporter Marina Villeneuve. She noted that the speaker did not explain how.

Though Cuomo is set to leave office early by the end of the month, the closure of the impeachment proceedings means he could again seek the governorship if he so chose. While no New York governor has ever reclaimed the position after resigning in disgrace, that hasn’t stopped some from trying.

A recent poll by Slingshot Strategies, moreover, suggested that a significant plurality of New York Democrats would vote to make Cuomo governor again over a number of major political figures in the state. Though the results were collected a few days prior to the governor’s August 10 resignation announcement, the survey came after the state AG issued her findings on Cuomo and sexual harassment.

Detractors from both sides of the aisle took to social media to torch the decision to shutter the impeachment process, with Democratic Assemblywoman Sarah Clark saying she is “frustrated” by the move and that Cuomo ought to face “full accountability” for his actions.

Republican state Rep. Elise Stefanik was much harsher in her own statement, arguing that closing the impeachment probe “makes every Albany Democrat complicit in [Cuomo’s] crimes and cover up,” calling New York politics a “corrupt cesspool.”

The critics were joined by Lindsey Boylan, a former staffer for Cuomo and among the most high-profile of his sexual harassment accusers. She insisted “the public deserves to know” the extent of Cuomo’s “misdeeds and possible crimes,” and that his “victims deserve justice.”

In his first interview since resigning, the soon-to-be ex-governor said he “did the right thing” in stepping down, as he did not want to tarnish New York’s reputation. Still, Cuomo maintained that he would have emerged victorious from an impeachment inquiry, arguing he simply did not want to embarrass lawmakers.

“I’m not gonna drag the state through the mud, through a three-month, four-month impeachment, and then win, and have made the State Legislature and the state government look like a ship of fools,” he told New York Magazine on Friday.

I’m not doing that. I feel good. I’m not a martyr. It’s just, I saw the options, option A, option B.

The controversy in New York somewhat mirrors the drive to impeach former President Donald Trump earlier this year, the second impeachment attempted in his single-term presidency. While Democrats argued that Trump “incited” the January 6 riot at the US Capitol and should be held accountable, his Republican supporters said he could not be impeached and removed after his time in office was up on January 20, insisting it would be unconstitutional. At the time, Heastie himself sided with Democrats on impeaching the president, apparently seeing no legal issue, though is now making the opposite argument in Cuomo’s case.

Trump’s second impeachment trial ultimately went ahead, but he was acquitted of all charges by the US Senate, nearly a full month after he left office.