Home / WORLD / Out on her feet: Female boxer knocked out standing up in shuddering title KO (VIDEO)

Out on her feet: Female boxer knocked out standing up in shuddering title KO (VIDEO) 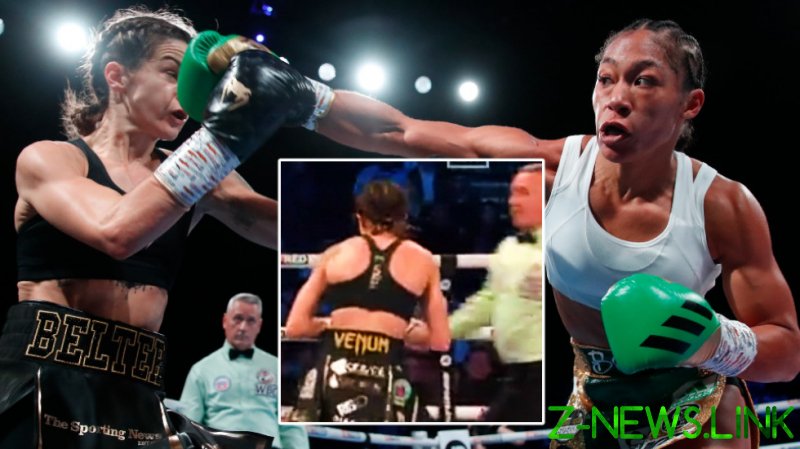 On a bad night for South Yorkshire fighters in Sheffield, where Kid Galahad also surrendered his IBF featherweight crown to veteran Kiko Martinez, Harper was upset by Alycia Baumgardner and relieved of her WBC and IBO super-featherweight belts.

Off-key from the outset following a year’s absence from the ring, Harper was hurt in round two before the KO came in the fourth.

Caught by a right hand, the 25-year-old was dead on her feet and knocked out without tasting the canvas as Mark Lyson stepped in and prevented Baumgardner from connecting with a fierce left being prepared.

“The most important thing I’d like to recognize is the great job Mark Lyson has done there,” said the Liverpudlian.

“Because Terri Harper is asleep on her feet. And the second punch that Mark Lyson stops [from] landing clean, that could’ve really done damage to Terri Harper there.

“Mark Lyson deserves all the credit in the world. It was a brilliant, brilliant call.”

Reacting to the loss, Harper said on social media that she was “fine” and “just heartbroken”.

“The biggest congratulations to my opponent. This is boxing, [the] job’s f*cked and I’m off back to [work in the] chip shop,” she joked.

“Love you all, thank you for your support – logging out for a few days,” Harper concluded with a love heart emoji.

Baumgardner dedicated the triumph to her coach and her grandmother, who passed away from Covid before the fighter flew out to the UK to prepare for the biggest night of her career.

“I been that,” the Michigan native bragged on Twitter, claiming she is now on the road to becoming undisputed champion. “Just had to show y’all on the big stage.

“Everyone who overlooked me, fueled me. My performance was by far the best in the 130[lb] division. I showed out, and showed who the top dog is. ‘Nuff said.”