Home / WORLD / Out of Afghan frying pan & into Ukrainian fire? America’s empire builders have another pawn to fuel their apocalyptic chess game

Out of Afghan frying pan & into Ukrainian fire? America’s empire builders have another pawn to fuel their apocalyptic chess game 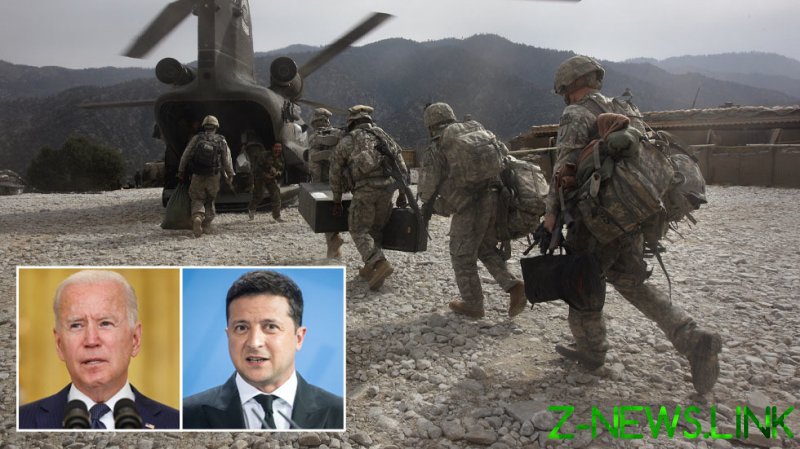 In a new op-ed in the Washington Post, McFaul makes it clear he sees Volodymyr Zelensky’s meeting with President Joe Biden as in need of a loud battle cry, appealing to the American government and the public to rally behind Ukraine’s calls for support. But, as is customary in the Stanford professor’s output, Kiev is really just an excuse, almost reduced to a mere pretext.

In reality, McFaul has a much larger (and very old) ax to grind, namely with Russia (and Belarus and China thrown in, too, for good measure). In his best Cold War-reenactor fashion, the former – and somewhat hapless and gaffe-prone – diplomat wants us to believe in three main things: dominos, good “sons of b**ches,” and strategic silence.

When it comes to dominos, McFaul is commendably explicit. Either Ukraine gets the support it wants from Washington, and the country then succeeds (there is a bad non-sequitur here, as some people in Kabul have just found out, but never mind…), or nasty autocrats from Moscow to Beijing will be “emboldened.” If Kiev topples, Western civilization goes with it.

One wonders what he means. Maybe “emboldened” would be a better term for the current state of mind of the Taliban? After all, they have not only completely defeated the US, which must boost morale, but America has also left them with a superb arsenal and experts and officers who, if the Taliban doesn’t just murder them, are perfect candidates for being pressed into their service.

However, never mind. Let’s worry about “emboldening” Russia, China, and that terror of the West, Belarus. A medium-sized, middle-income European country that, let’s be honest, is a threat to nobody but itself.

This is, make no mistake, a classic of Cold War illogic, elevating, or rather fantasizing, a state into a strategic forward position on which depends a whole global or at least regional outcome. It did wonders for those initially “benefiting” from this figure of non-thinking, from Laos to Vietnam to name only two. And – oh, irony! – while the domino theory caused immense suffering, it was also completely needless, even on its own terms. Because it was tested, even if McFaul hasn’t noticed or can’t recall: it never worked, Vietnam did “fall” – and yet, the West won the Cold War, and the Soviets are gone.

But for McFaul, the Cold War, more than 30 years after its end, has no real history. It’s a Hollywoodish myth of good guys holding the line for “freedom” in the middle of Germany. And when you see no history, there is, of course, nothing you can learn from.

Zelensky, in his view, may have problems to contend with, McFaul acknowledges. But if he is a “son of a b**ch,” he is at least “our son of a b**ch.” The US, he recommends, should go easy on corruption in Ukraine. In his resolute focus on a small part of the world, this political scientist seems to not only have no historical memory but also be unable to build associations across continents. Otherwise it might have occurred to him that corruption has just played a major role in the Great Rout of Kabul.

What a great idea to just deliberately downplay it! That worked so well last time around, which is hard to remember because it was – almost yesterday.

It gets better. If corruption shouldn’t be mentioned so much anymore in polite neo-Cold War company, McFaul is ready to offer an ersatz: Let’s talk more, instead, about democracy! That sounds appealing, even if it’s always a little funny coming from someone who is part of the American oligarchy’s upper intelligentsia crust.

The bigger oddity about his idea of democracy is that it includes classic moves from, as we now say, “the playbook” of authoritarianism. McFaul praises Zelensky for going after media affiliated with the political opposition. He also seems happy with Kiev hammering, not by political but by pseudo-legal means, the main elected opposition leader Viktor Medvedchuk, who supports rapprochement with Russia. For this democracy expert from Stanford, such behavior is commendably “forceful.”

His approach is not only baffling but dishonest. McFaul simply omits that Zelensky has by now also gone after yet another top media outlet, Strana.ua, which was shut down through an opaque security-service-driven procedure in Ukraine’s National Security Council (fortunately with only very limited success). Even the OSCE, unlike McFaul, has noticed something isn’t quite right here in Ukraine.

But no wonder that the former ambassador gets especially sloppy exactly at this point. Because that case is so egregious that even the most gung-ho Cold War-reenacting “democracy” expert would have trouble bending over backwards enough to defend it openly. So enter Cold War trick number three: Strategic Silence. When you can’t domino it and the behavior of your favorite “son of a b**ch” gets so embarrassing that it’s hard to spin, then just pretend it’s not there.

If McFaul were genuinely interested in democracy in Ukraine – and not just mobilizing and using the country on that grand old chessboard that armchair geopoliticians of his kind have always loved so much – he’d use his op-ed to warn Zelensky to reign in his own authoritarian tendencies. But instead this “friend” of Kiev – and here’s a good use for the term – only encourages the worst tendencies of what he seems to see as America’s miracle man in Ukraine.

And, of course, he also emboldens everyone in the US who believes that its degree of corporate media control and streamlining at home is not yet tight enough. When you promote authoritarianism abroad, it has a way of eventually backfiring in your own backyard.