Home / WORLD / Our unequal world does not need a billionaire space race. I’d send Bezos & Branson on a one-way ticket to the Moon

Our unequal world does not need a billionaire space race. I’d send Bezos & Branson on a one-way ticket to the Moon 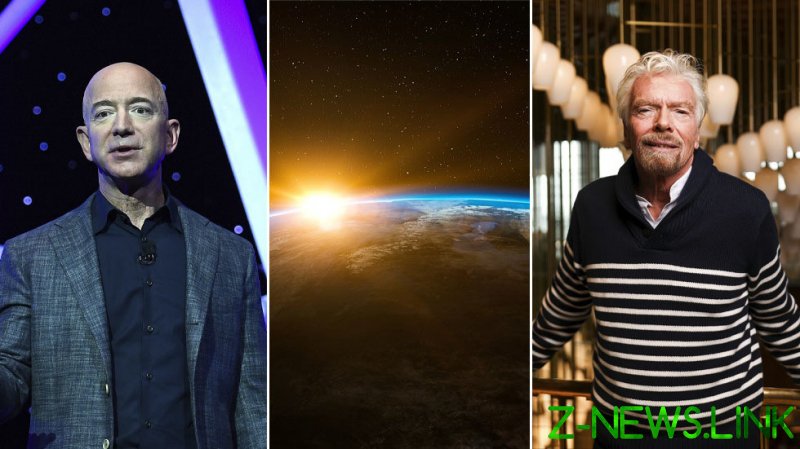 It’s shocking to me that I even have to point this out. But when the world has been decimated by Covid, countless billions of people are living in poverty in both rich countries and poor countries, and when most of the world’s population has no access to good, safe and free healthcare, why are two obscenely rich men engaged in a space race?

In one corner, we have Jeff Bezos, the founder of Amazon and reportedly the world’s wealthiest individual but responsible for a company that is bad for the environment, wasteful and is known as a poor employer. In the other there is Sir Richard Branson, the entrepreneur behind everything Virgin, including Virgin Care which sued the NHS, taking millions out of Britain’s public healthcare system (particularly worthy of note at the moment as the Queen dishes out the George Cross to the NHS on its 73rd anniversary, after a torrid 16 months on the frontline of the pandemic).

Now Branson has a new toy, Virgin Galactic, and last week he was given a licence to undertake a crewed test flight to space, taking off from the company’s spaceport in New Mexico, with the focus of the flight “evaluating… seat comfort, the weightless experience and the views of Earth” in the space cabin as part of the “private astronaut experience.”  Branson himself will be on board.

Yes, you’re right. As someone who has been crushed into cattle-like trains trying to get to work in the morning, I am indeed rolling my eyes at the prospect. But Branson’s adventure highlights a flurry of activity that is taking place in the realm of space tourism, as companies with what the press generously describes as ‘eccentric billionaire entrepreneurs’ at the helm – such as Branson, Bezos and Elon Musk – seek to bring space travel to ‘the people’. Or at least ‘their people’.

Branson has taken great delight in announcing that his new space venture is scheduled to take off on July 11, beating rival Bezos into sub-orbital space by nine days. His company currently has around 600 reservations for future trips, at $250,000 (£175,000) a ticket.

In 1890, when William Morris published his utopian book set in the future ‘News From Nowhere’, he presented a picture of socialism, artisanal respect for craftsmanship, and turning back time on environmentally damaging technology. And yet here we are in 2021, and our current ‘science fiction’ is quite the opposite – billionaires making money from damaging the world and the environment, and people playing Star Wars simply because they can, seemingly with no one holding them to account. Why is no one questioning how much private property and private wealth is too much? In a world that is so unequal, isn’t it wrong that this cannot be challenged, no matter how damaging and toxic it is to the majority?

I am not a philistine. I understand that there are legitimate reasons for researchers to know what happens up in space. It is, I believe, the human condition to want to know what appears unknowable, to want to see what you are told you can only imagine. As a working-class child growing up in a Nottinghamshire mining community, I didn’t see London or ride a train until I was 16. But I had long dreamed of doing both.

I am also aware space travel can help us here on Earth. For example, scientists from the University of Nottingham and the University of Exeter are involved in a project that recently saw thousands of tiny worms launched into space to help us understand more about muscle loss and how to prevent it. Spaceflight is an extreme environment that is regarded as an excellent model to enhance the understanding of ageing, inactivity and certain clinical conditions on different body systems. Studying changes in muscle that occur with spaceflight could lead to more effective therapies and new treatments for age-associated muscle loss and many negative changes to the body, with astronauts losing up to 40% of their muscle after six months in space.

And yet we have reached a stage where this costly privilege of entering such an extreme environment has become a deeply extravagant show of wealth that will be used so the richest people in the world can have a brief ‘out of this world’ experience.

Make no mistake, either: this is only just the beginning. These entrepreneurs are tantamount to the colonialists of old, always looking for new land and new markets to expand into. The difference, though, is that this isn’t a problem for a specific part of the world, whether it be America, or Britain, or Europe or Africa – it is a global problem.

Because, let us be honest – the evidence throughout human history is stark. When entrepreneurs who have a thirst to succeed seek to open new markets, their goals are seldom hampered by such things as ethics. And this is why governments and professional bodies across the world should be looking closely at what is going on and asking in whose interest this billionaire space race really is. ‘Just because you can, should you?’ is the question that I would hope is being asked in the corridors of power.

And even if our governments and so-called leaders are turning a blind eye to it all, it doesn’t mean the rest of us mere mortals should. In our horribly impoverished, unequal world it’s a scandalous use of money best summed by Gil Scott Heron poet, musician, and sociologist in his 1970 song ‘Whitey On The Moon’. ‘A rat done bit my sister Nell and whitey’s on the moon. I can’t pay my doctor bills, but whitey’s on the moon.’ More than 50 years later, the sentiment that inspired these lyrics seems as relevant as ever.